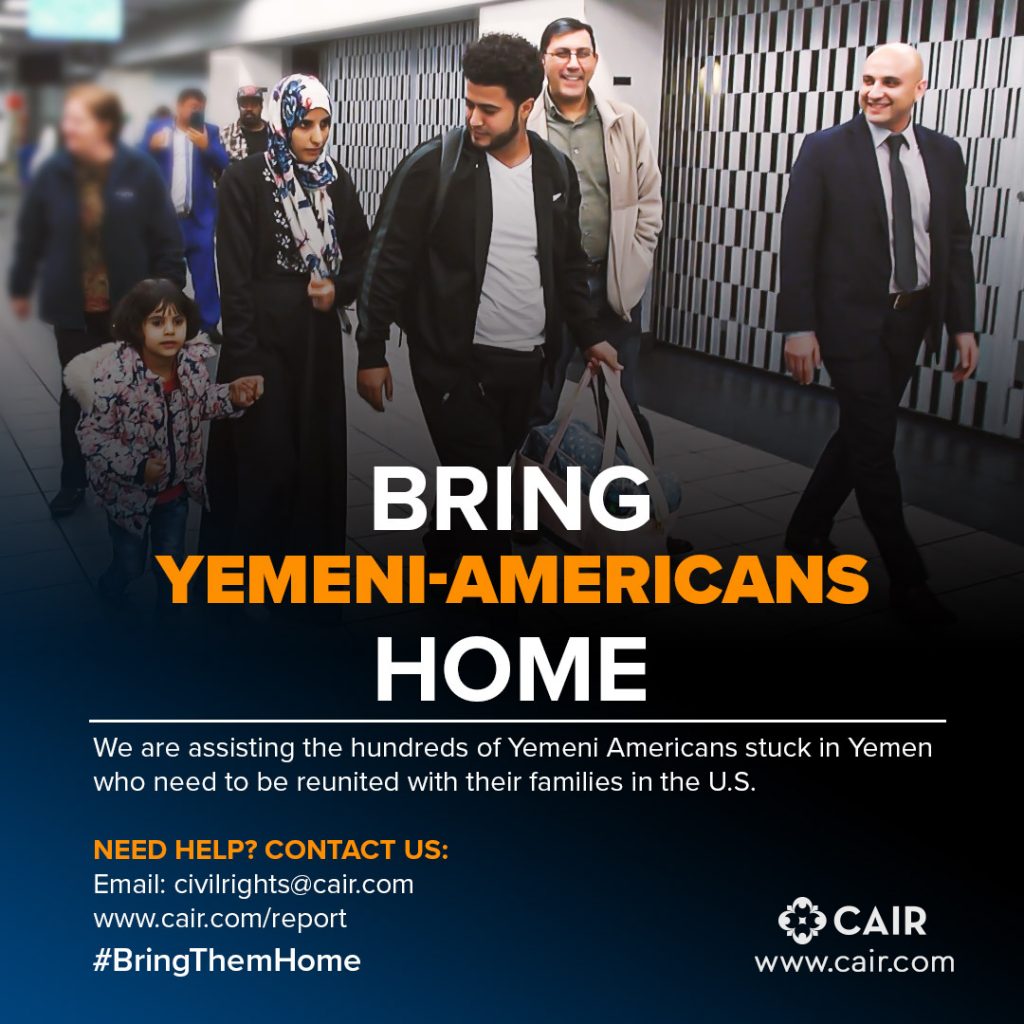 Want to join us? CAIR is looking for four volunteers to hold welcome signs. Contact: info@cair.com   (WASHINGTON, D.C., 6/26/20) – On Sunday, June 28, at 6:50 p.m. the Council on American-Islamic Relations (CAIR), the nation’s largest Muslim civil rights and advocacy organization, will live stream its welcoming of Yemeni Americans arriving at the Washington Dulles International Airport (IAD). More than 1,000 American citizens and LPRs (Legal Permanent Residents) have been stranded in Yemen after traveling to that country for a brief period of time. They were scheduled to return to the U.S. at the end of March 2020 but became stranded due to the 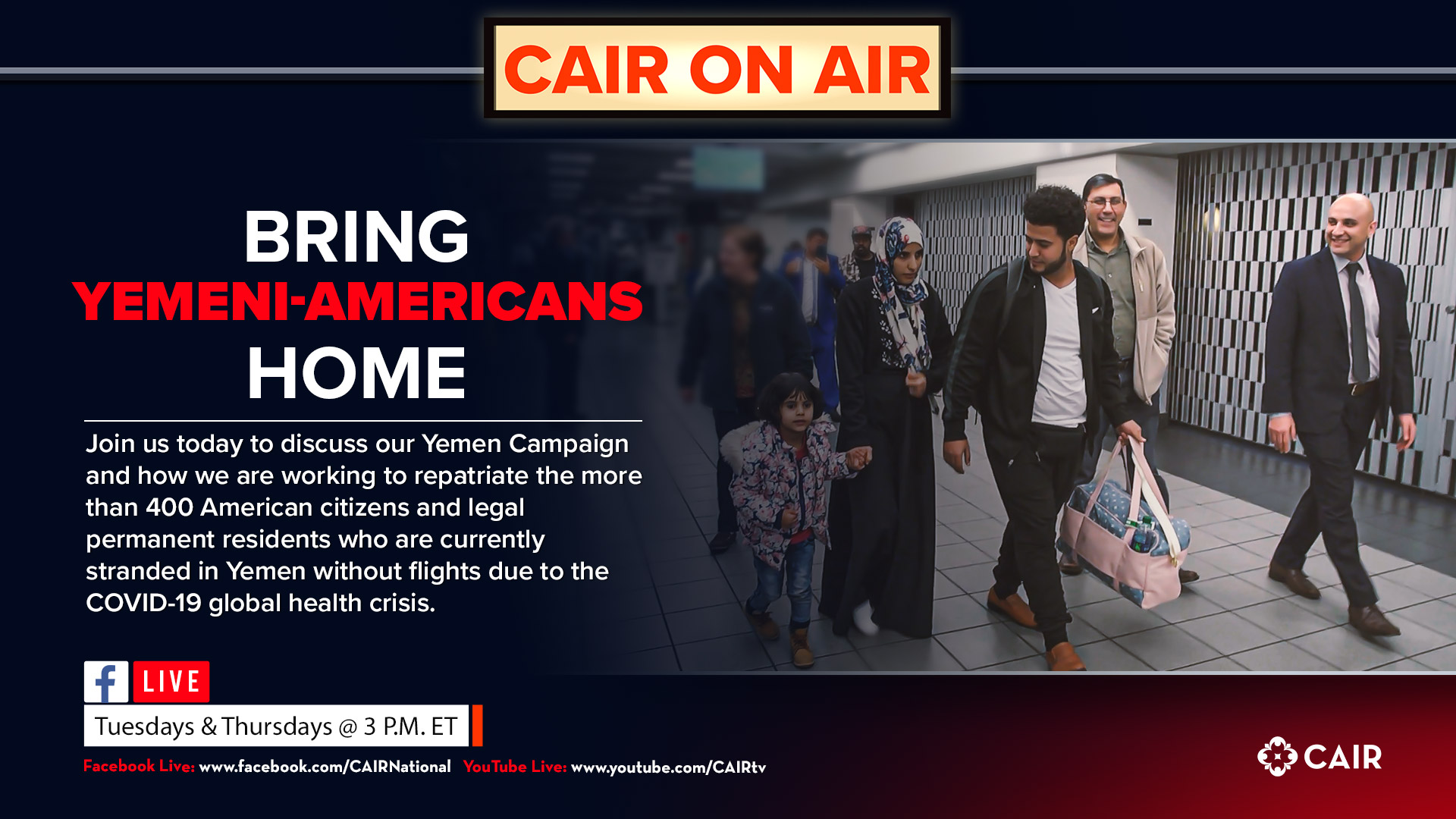 (WASHINGTON, DC., 6/23/20) – Today, the Council on American-Islamic Relations (CAIR), the nation’s largest Muslim civil rights and advocacy organization, will host a live 30-minute “CAIR On Air: The Muslim Action Hour” at 3 p.m. (ET) on Facebook and YouTube. Facebook GO TO: https://www.facebook.com/CAIRNational YouTube GO TO:https://www.youtube.com/CAIRtv Today’s program is themed “Bring Yemeni-Americans Home” with guests:  Jehan Hakim, Yemeni Alliance Committee Ahmed Mohamed, CAIR-NY  Join us today to discuss our Yemen Campaign and how we are working to repatriate the more than 400 American citizens and legal permanent residents who are currently stranded in Yemen without flights due to the COVID-19 global health crisis. [NOTE: Please submit your questions 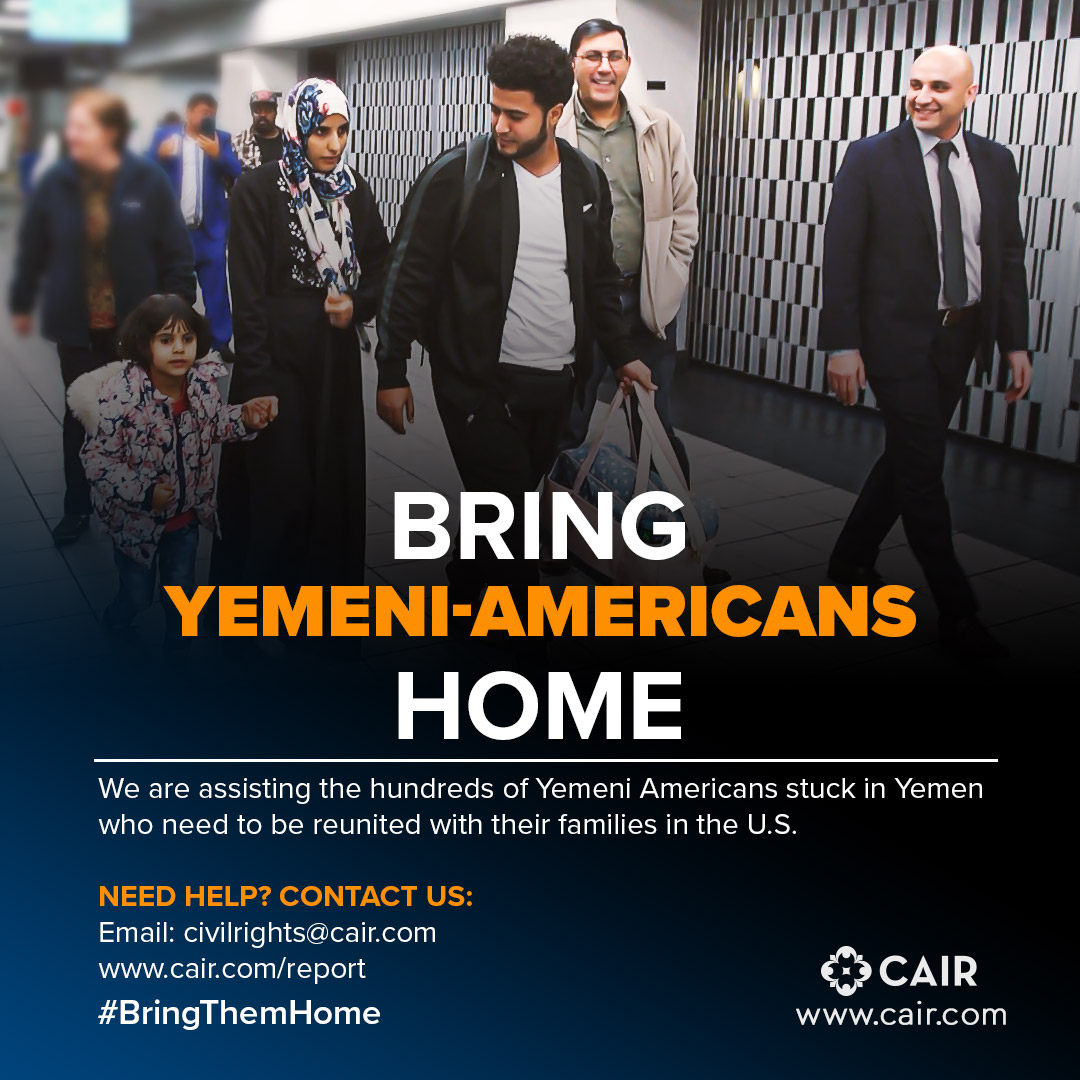 #BringThemHome: CAIR Calls on State Department to Bring Home Americans and Legal Permanent Residents Stranded in Yemen without Flights Due to the COVID-19 Crisis

433 Yemeni Americans and LPRs (legal permanent residents) have contacted CAIR and CAIR Chapters nationwide because they are stranded in Yemen without flights due to the COVID-19 crisis. The State Department is arranging for two flights on June 28 and July 1, departing from Aden, Yemen to Jeddah, Saudi Arabia to Washington-Dulles International Airport. Many passports and travel documents of stranded Americans expired during the COVID-19 lockdown in Yemen and do not currently qualify under State Department ticketing guidelines to return home. CAIR is calling on the U.S. government to immediately assist those Americans and LPRs stranded in Yemen without travel

(NEW YORK, N.Y., 8/6/2019) – The New York chapter of the Council on American-Islamic Relations (CAIR-NY), the nation’s largest Muslim civil rights and advocacy organization, today announced the reunification of a Yemeni-American family that was separated by President Trump’s Muslim Ban.  Yesterday, Saleh Almuganahi and his wife and two daughters arrived in New York City. Last month, CAIR-NY sued the Trump administration for retroactively applying the Muslim Ban to revoke an approved visa for Almuganahi’s wife. Within 24 hours of filing suit, the U.S. Embassy approved the visa.  Almuganahi immediately departed the United States to make arrangements for his family

(NEW YORK, N.Y., 7/8/2019) – The New York chapter of the Council on American-Islamic Relations (CAIR-NY), the nation’s largest Muslim civil rights and advocacy organization, filed suit against the Trump Administration for retroactively applying the Muslim Ban to revoke an approved visa for a Yemeni-American family.  SEE CAIR-NY LAWSUIT The suit alleges that U.S. Embassy officials approved the plaintiff’s visa in October 2017. Months later, Embassy officials reversed the decision by unlawfully applying the Muslim Ban to revoke a previously approved visa. The Muslim Ban does not permit retroactive application.  “Our client’s experience is all too familiar for the Yemeni-American community

(WASHINGTON, D.C., 4/18/19) – The Council on American-Islamic Relations (CAIR), the nation’s largest Muslim civil rights and advocacy organization, today condemned President Trump’s veto of a bill requiring the United States to withdraw armed forces from the Yemen War. The bipartisan bill would have required the U.S. to end all American military involvement in Yemen, invoking the War Powers Act which stipulates that Congress has the authority to remove forces engaged in hostilities outside the United States without a declaration of war. On Tuesday, Trump issued the second veto of his presidency to strike down the legislation, which lacks the

(WASHINGTON, D.C., 3/14/19) – The Council on American-Islamic Relations (CAIR), the nation’s largest Muslim civil rights and advocacy organization, today welcomed the passage of a bill in the U.S. Senate last night cutting off U.S. military support to Yemen. Introduced by Senators Bernie Sanders (I-VT), Chris Murphy (D-CT), and Mike Lee (R-UT), Senate Joint Resolution 7 directs the President to remove U.S. forces from Yemen within 30 days of the adoption of the resolution. Without an official declaration of war, Congress has the authority to remove U.S. Armed Forces from hostilities abroad pursuant to the War Powers Resolution (50 U.S.C. 1544(c)). SEE: https://www.congress.gov/bill/116th-congress/senate-joint-resolution/7

(WASHINGTON, D.C., 11/27/18) – The Council on American-Islamic Relations (CAIR), the nation’s largest Muslim civil rights and advocacy organization, today called on all Americans of conscience to contact their members of Congress and urge them to support bipartisan legislation removing U.S. Armed Forces from hostilities in Yemen. CLICK HERE TO SEND CAIR’S ACTION ALERT TO CONGRESS “The War in Yemen represents one of the worst ongoing humanitarian crises in the world today,” said CAIR Government Affairs Director Robert McCaw. “It is high time that the United States withdraws its troops and pushes for a ceasefire so that humanitarian organizations can get in

(WASHINGTON, D.C., 1/11/18) — The Council on American-Islamic Relations (CAIR), the nation’s largest Muslim civil rights and advocacy organization, today condemned the Trump administration’s announcement this week terminating the Temporary Protected Status (TPS) of the 263,000 Salvadoran immigrants living in the United States, the humanitarian program allowing them to live and work in the U.S. since a pair of earthquakes devastated El Salvador in 2001. Yesterday, the U.S. State Department issued a Level 3 Travel Advisory for El Salvador, cautioning Americans “do not travel” to the country due to “violent crime, such as murder, assault, rape, and armed robbery, [being] common” – “gang activity, such

(WASHINGTON, D.C., 2/3/17) – The Council on American-Islamic Relations, the nation’s largest Muslim civil rights and advocacy organization, today called for a “full, thorough and public investigation” into the Trump administration’s recent military raid in Yemen, which resulted in the death of an American serviceman and numerous civilian casualties, including an eight-year-old American citizen. “Congress must conduct a full, thorough and public investigation of this deadly incident to ensure transparency and accountability required whenever civilians are killed or injured by our military actions,” said CAIR National Executive Director Nihad Awad. “Even as we confront terror groups, we must uphold American