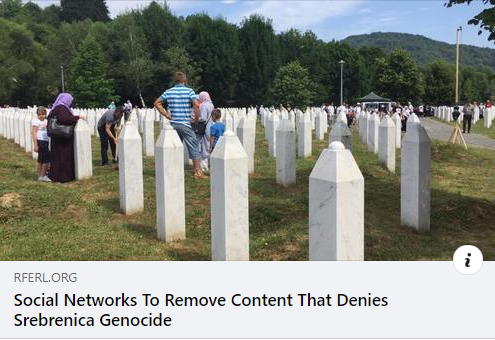 (WASHINGTON D.C., 8/12/2021) – The Council on American-Islamic Relations (CAIR), the nation’s largest Muslim civil rights and advocacy organization, today welcomed a decision by Google and Twitter to remove content denying the 1995 Srebrenica Genocide in Bosnia from their platforms.

The two companies confirmed they would be banning content denying the Srebrenica genocide following a request by the Institute for Research of Genocide Canada (IRGC). A spokesman for YouTube, which is owned by Google, told Radio Free Europe (RFE) that Google has “clear and established hate-speech policies that prohibit content that minimizes or denies a well-documented violent event, including the Srebrenica genocide,” and that company would remove such content. A spokesman for Twitter said the platform’s hate policy prohibits a wide range of behavior, including “attempts … to deny and minimize” violent events.”

In July 1995, Bosnian Serb forces captured the town of Srebrenica, a designated U.N Safe Area in eastern Bosnia. As Dutch U.N. peacekeepers passively looked on, the Serbs killed more than 8,300 Muslim Bosniak men and boys and buried them in mass graves. The event was determined to be a genocide by the International Criminal Tribunal for the Former Yugoslavia (ICTY) and the International Court of Justice (ICJ).

“The mass killings in Srebrenica were an atrocity that shocked the world and that has been rightfully called a genocide by the international community. We welcome the decisions by Google and Twitter to ban content denying the genocide and urge all platforms to take action against hateful and bigoted content targeting Muslims.”