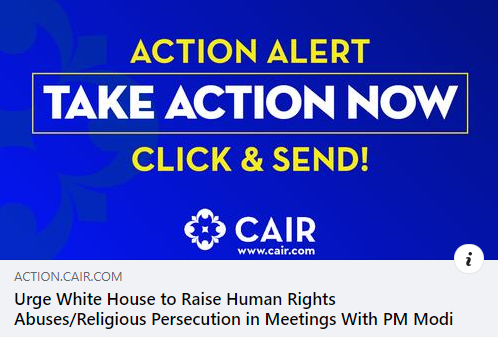 (WASHINGTON, D.C, 9/22/21) – The Council on American-Islamic Relations (CAIR), the nation’s largest Muslim civil rights and advocacy organization, is urging all Americans to join it in calling on President Biden and Vice President Harris to raise the issues of human rights abuses, including religious persecution of Muslims, in India when they meet with that nation’s Prime Minister Narendra Modi in coming days.

Vice President Harris is expected to meet with Prime Minister Modi on September 23rd and with President Biden on September 24th for his first in-person meeting at the White House. The two nations are expected to discuss topics covering security, the COVID-19 pandemic, science and technology, and the climate crisis.

“It is unacceptable for the Biden administration to welcome someone who is responsible for a multitude of human rights abuses and for the persecution of religious minorities,” said CAIR National Executive Director Nihad Awad. “President Biden and Vice president Harris have an obligation to press Prime Minister Modi about his human rights record and to push for real change in India’s counterproductive and anti-democratic actions relating to minority communities.”

In April 2021, the World Press Freedom Index classified India as “one of the world’s most dangerous countries” for journalists.

SEE: World Press Freedom Index: India Retains 142 of 180 Spot, Remains “one of the world’s most dangerous countries” for Journalists

This month, Genocide Watch issued a Genocide Emergency: India report placing India at stage No. 8 – persecution – on the 10-point scale leading to genocide, adding that although the government is not yet at the mass extermination phase, No. 9, it is already at No. 10, official denial.

And in 2020, Freedom House, a nonprofit that produces research and reports on a number of core thematic issues related to democracy, political rights and civil liberties declined India’s status from Free to Partly Free due to a multiyear pattern in which the Hindu nationalist government and its allies have presided over rising violence and discriminatory policies affecting the Muslim population.