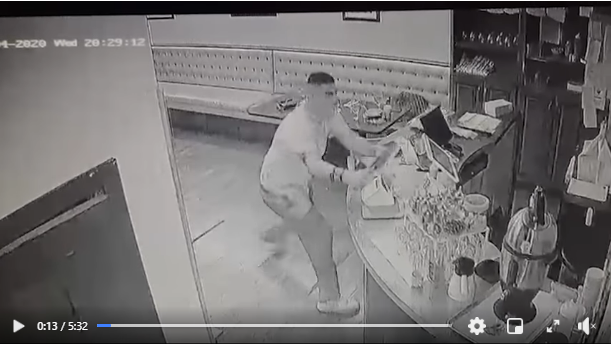 The restaurant appears to have been targeted because of the owners’ Turkish national origin.

Security footage from Café Istanbul revealed several males throwing chairs both inside and outside the business, throwing a chair at one of the owners and destroying the inside of the restaurant.

According to a statement given to the CAIR-LA Civil Rights Department, one of the owners saw the alleged attackers running into the business and tried to protect his wife – who alerted diners and employees to run. Approximately 5-7 attackers were in the restaurant and broke furniture, dishes and equipment, hitting the owner with a thrown chair.

As they were destroying the inside of the restaurant, the owner said the alleged attackers were speaking Armenian, swearing at the nation of Turkey and Azerbaijan and threatening the lives of the people in the restaurant.

As the owner and diners left the business through the rear, the owner said there were 8-10 more people running to attack them. The group found an open building to hide in and were able to call the Beverly Hills Police Department for assistance.

“We express our sympathies to the owners and patrons of the restaurant who were attacked and to the local Turkish-American community, which has been terrorized and shaken by this hateful assault. We are grateful no one was seriously injured. The level of viciousness shown in the video is both outrageous and sickening. No individual or their business should be targeted in a manner such as this. We urge fellow Californians not to allow international conflicts to undermine harmony and the safety of any community here in our country.

“We call upon local law enforcement to investigate this matter as a hate crime and for the perpetrators to be arrested and charged as such.”