BREAKING NEWS: CAIR-PA Calls for Probe of Possible Hate Crime After Video Shows Assault on Muslim Man Told ‘Go Back to Your Country’ 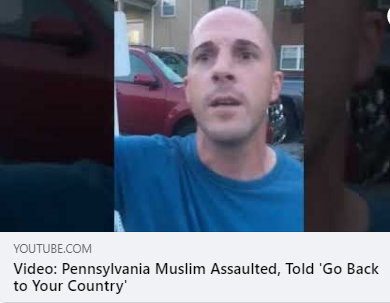 (PHILADELPHIA/PITTSBURGH, PA – 9/9/2020) – The Pennsylvania chapter of the Council on American-Islamic Relations (CAIR-PA), the nation’s largest Muslim civil liberties and advocacy organization, today called on local, state and federal law enforcement authorities to investigate an assault – captured on video – on a Muslim man in that state by an alleged attacker who is shown shouting “Go back to your country” during the incident.

The victim was walking along the street near his apartment when he was allegedly attacked by another man’s dog. When the dog came after the Muslim man again, he asked the dog’s owner to put the dog on a leash. It was at this time the man in the video, verbally attacked and shouted at the victim: “Go back to your country, you F****”, “F*** you and your f****** country, you (inaudible) head”. The alleged attacker is then seen shoving the victim. Police were called and a report was filed, but no further action has been taken at this time.

Video: Pennsylvania Muslim Assaulted, Told ‘Go Back to Your Country’

“While all the facts in this case still need to be investigated, there can be no doubt that the bigoted and xenophobic venom spouted by the white attacker in the video is the logical result of the climate of hate fostered by the racist policies of the Trump administration. CAIR-PA calls on law enforcement authorities to fully investigate this incident as a possible hate crime and to bring the alleged perpetrator to justice.”

The Washington, D.C.,-based civil rights organization has reported an unprecedented spike in bigotry targeting American Muslims, immigrants and members of other minority groups since the election of Trump as president.