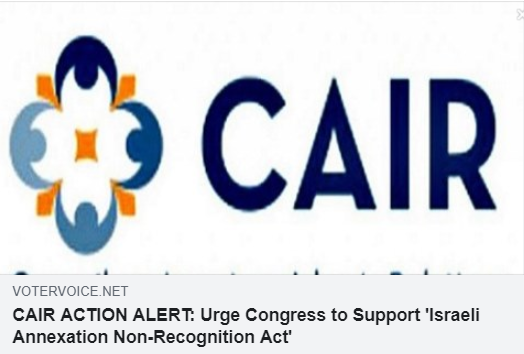 (WASHINGTON, D.C., 8/18/20) — The Council on American-Islamic Relations (CAIR), the nation’s largest Muslim civil rights and advocacy organization, is calling on every American to urge their elected representative to co-sponsor and support the Israeli Annexation Non-Recognition Act, a bill to prohibit the United States from formally recognizing or providing aid to any area of the occupied West Bank annexed by Israel in violation of international law.

CAIR has joined more than 30 other organizations in publicly supporting the bill.

In a statement, Rep. McCollum said in part:

“I want Palestinians and Israelis to have their human rights respected, their right to self-determination realized, and a future with peace, security, equality, and justice. Annexation is antithetical to these goals and will fuel instability, injustice, and an abhorrent system of apartheid. This is an intolerable outcome for Palestinians, Israelis, and Americans. I reject Israeli annexation. I condemn annexation. And I will work to ensure the U.S. does not support, defend, or legitimize any plan to illegally annex Palestinian lands.”

In addressing initial reports that Israel had agreed as part of a deal with President Trump and the United Arab Emirates to suspend its planned annexation of Palestinian territories, Rep. McCollum added:

“Yesterday’s diplomatic agreement between Israel and the United Arab Emirates changes nothing. Prime Minister Netanyahu and President Trump have taken nothing off the table. Their promises and commitments are worthless because they have both proven, time and time again, that they cannot be trusted.”

Following the deal Israeli Prime Minister Benjamin Netanyahu said that his plans to pursue annexation were still “on the table. . .and there is no change in my plan.”

In a by statement by CAIR Director of Government Affairs Robert S. McCaw:

“CAIR applauds Representative McCollum and the members of Congress who joined her in introducing the Israeli Annexation Non-Recognition Act. We thank them for courageously standing up for the rights and freedom of the Palestinian people. It is now up to the American people to ensure that the rights and land of the Palestinian people are protected from illegal Israeli annexation by urging their members of Congress to endorse this act.”

Earlier in July, CAIR commended U.S. Senator Chris Van Hollen (D-MD) – and the 12 other leading Democratic Senators that joined him – for introducing an amendment that would prohibit the use of any U.S. military funds to be used by the government of Israel in the annexation of Palestinian territories.

According to reports, Israeli Prime Minister Benjamin Netanyahu planned to begin further illegal annexation of the West Bank on July 1, 2020, but has now delayed the process due to international controversy surrounding the intended process and perceived outcome.

CAIR has called on all Americans to urge their members of Congress to take action against the Israeli government’s illegal plan to unilaterally annex more parts of the occupied West Bank and further entrench segregationist rule over Palestinians.

In a letter, CAIR also called on Congress to cut or condition the $4 billion in U.S. taxpayer-funded giveaway to the Israeli government so that our country is not responsible for supporting the planned annexation and enabling a system of apartheid.

According United Nation’s Secretary General António Guterres, Israel’s planned annexation is illegal under international law and would most likely harm any efforts of a lasting peace for the region.

In CAIR’s 26-year history, it has worked to empower American Muslim to defend the civil, human and religious rights of oppressed Muslim communities overseas.