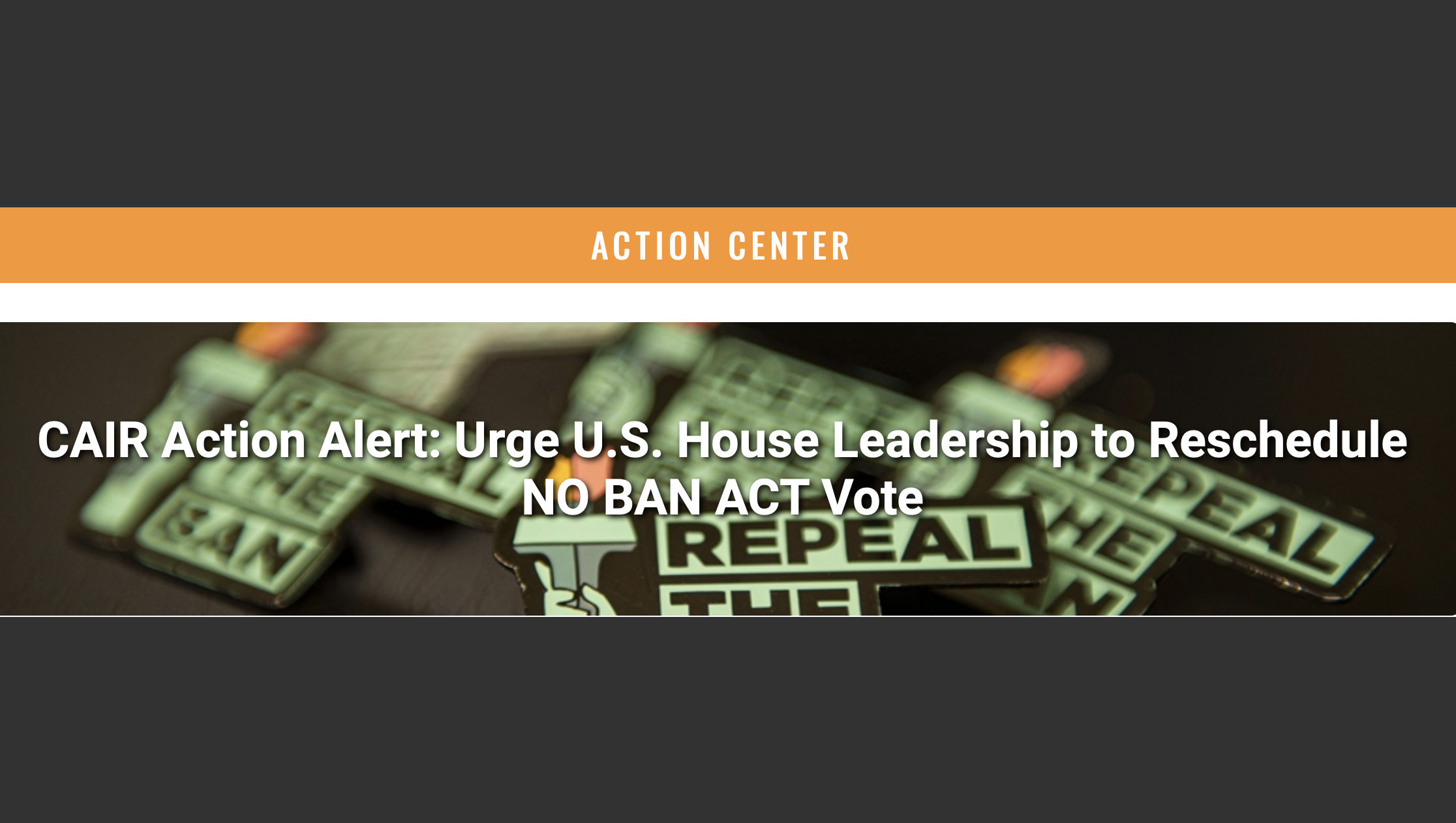 (WASHINGTON, D.C., 3/12/20) — The Council on American-Islamic Relations (CAIR), the nation’s largest Muslim civil rights and advocacy organization, is urging on U.S. House Speaker Nancy Pelosi and Majority Leader Steny Hoyer to recommit to rescheduling a vote to secure the passage of Rep. Judy Chu’s National Origin-Based Antidiscrimination for Nonimmigrants Act or the NO BAN Act – a comprehensive bill repealing the Muslim Ban.

CAIR is also calling on all Americans to take action and ask their member of Congress to support the immediate rescheduling of this important measure.

Take Action: Urge Your Member of Congress to Support Placing the NO BAN Act Back on the House Calendar

The NO BAN Act was previously slotted on the U.S. House floor schedule to be voted on today. Congress is expected to break early for a previously scheduled weeklong recess. Speaker Pelosi and Majority Leader Hoyer have not yet publicly recommitted to rescheduling a vote for the NO BAN Act.

The NO BAN Act includes three critical components to fighting the Ban:

The NO BAN Act has been merged with Washington Representative Pramila Jayapal’s Access to Counsel Act of 2020 – an act that would guarantee CBP and ICE provide persons detained for more than an hour in secondary screening access to their private legal counsel, including non-citizens and unaccompanied children, who may be detained at the U.S. border or ports-of-entry for long periods of time. CAIR is a supporter of the Access to Counsel Act.

Yesterday, CAIR joined fellow members of the No Muslim Ban Ever Coalition on Capitol Hill in a congressional action calling for vote on No Ban Act.

On Burma, Eritrea, Kyrgyzstan and Nigeria, the restrictions will apply to immigrant visas — for those seeking to live or work in the U.S. permanently. For Sudan and Tanzania, the restrictions are being placed on diversity visas. Iran, Syria, Libya, Venezuela, North Korea, Yemen, and Somalia were already subject to the travel ban, and remain so.

In September, CAIR submitted a written statement endorsing the NO BAN Act to a joint congressional oversight hearing on the Trump administration’s Muslim Ban by U.S. House Judiciary’s Subcommittee on Immigration and Citizenship and Committee on Foreign Affairs’ Subcommittee on Oversight and Investigations.