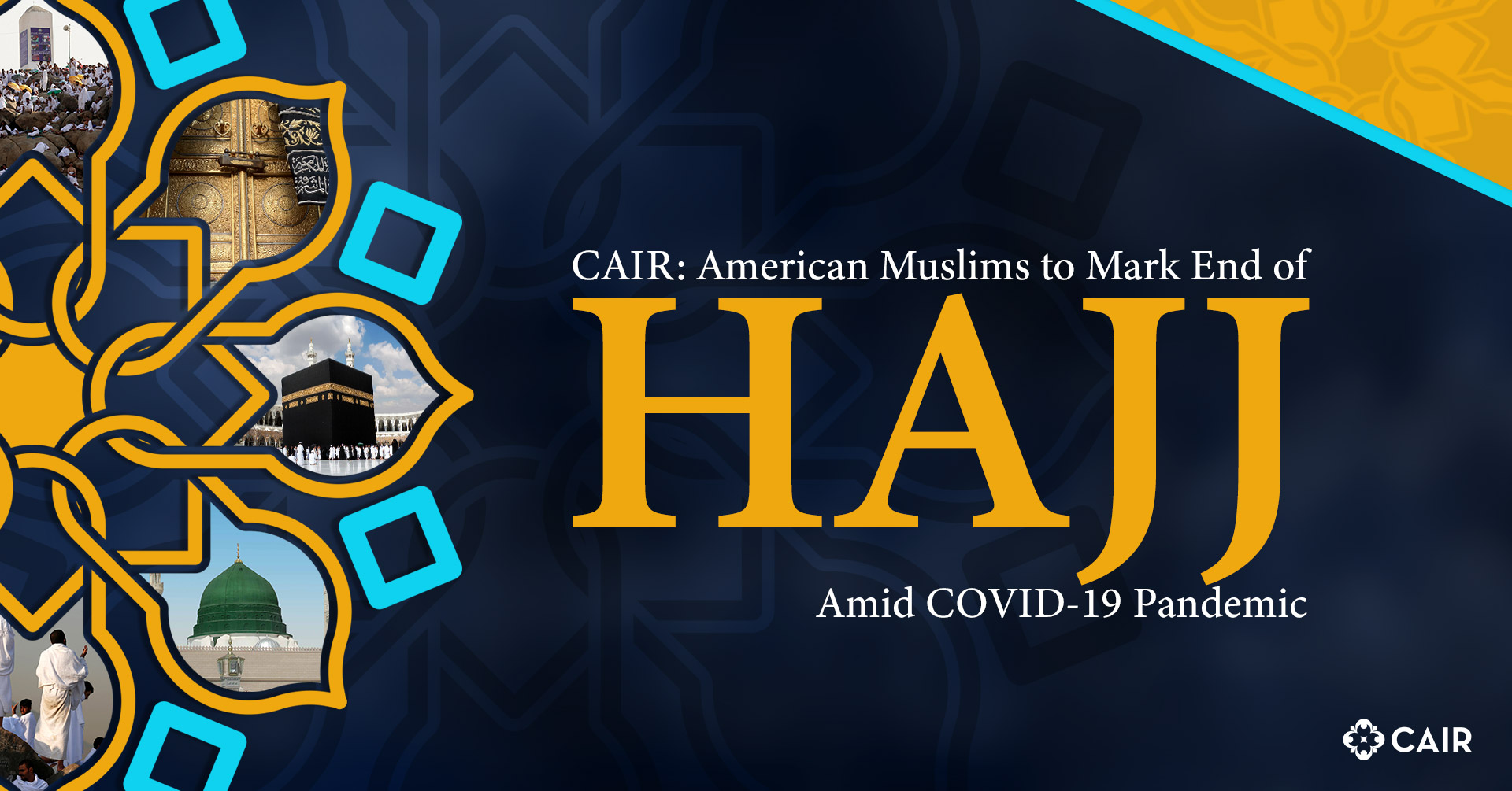 (WASHINGTON, D.C., 7/28/20) – On Friday, July 31, American Muslims will mark the end of the yearly pilgrimage to Mecca, or Hajj, with prayers and celebrations around the country. The prayers and the holiday that follows Hajj are called Eid ul-Adha (EED-al-ODD-ha), or “festival of the sacrifice.”

Eid ul-Adha, commonly referred to as just “Eid,” commemorates the Prophet Abraham’s willingness to sacrifice his son Ishmael at God’s command. The holiday is normally celebrated with the prayers, small gifts for children, distribution of meat to the needy, and social gatherings. During this holiday, Muslims exchange the greeting “Eid Mubarak” or “blessed Eid.” In past years, some two million Muslims, including thousands of American Muslims, go on Hajj.

IMPORTANT NOTE: This year, due to the COVID-19 pandemic, the Hajj is being limited and local Muslim communities are modifying religious observances and other Eid-related activities based on health and safety guidelines.

Call local CAIR chapters or other Muslim organizations for details about Eid celebrations. GO TO: https://www.cair.com/about_cair/cair-chapters/

“Thus We settled Abraham at the site of the House (the Ka’aba) (saying): ‘Do not associate anything with Me, and purify My house for those who walk around it, and those who stand there (praying), and those who bow down on their knees in worship. Proclaim the pilgrimage among mankind: they will come to you on foot and on every lean (beast of burden); Let them come from every deep ravine, to bear witness to the advantages they have, and to mention God’s name on appointed days.” Chapter 22, Verses 26-28

Hajj is one of the “five pillars” of the Islamic faith. (The other pillars include a declaration of faith, daily prayers, offering regular charity, and fasting during the month of Ramadan.) Pilgrimage is a once-in-a-lifetime obligation for those who have the physical and financial ability to undertake the journey.

When the main portion of the pilgrimage is completed, Muslims worldwide gather for communal prayers on the first day of Eid ul-Adha (EED-al-ODD-ha), the second of the two major Muslim holidays.

The obligatory and optional activities of Hajj include:

* Entrance into a state of self-control called “ihram,” during which pilgrims are forbidden to harm living creatures, even insects or plants, or raise the voice in anger. The state of ihram is signified (for men) by the wearing of two pieces of unsewn white cloth. This clothing signifies the equality of all before God. No specific clothing is prescribed for female pilgrims.

* Circling (“Tawaf”) of the “Ka’aba,” the stone building Muslims believe was originally built by Abraham and his son Ishmael. The Ka’aba is viewed as the first sanctuary on earth dedicated to the worship of the One God. It is a symbol of unity for Muslims because all prayers, wherever they are performed, are oriented in the direction of the Ka’aba.

* The “Sa’i,” or “hastening” between two small hills near the Ka’aba, to commemorate Hagar’s search for water to offer her son Ishmael.

* The “Day of Arafah.” Arafah is a mountain and its surrounding empty plain near Mecca. On this day, the climax of the Hajj season, pilgrims assemble for supplication to God.

* The stoning of three pillars representing Satan’s temptation of Abraham. The stoning indicates the pilgrim’s rejection of evil deeds.

* Cutting the hair to symbolize the completion of Hajj.

* Sacrifice of an animal to help feed the poor, and in remembrance of Abraham’s willingness to sacrifice his son Ishmael at God’s command. A portion of the meat is distributed to relatives and to the needy.

CAIR urges community members to report any bias incidents to police and to CAIR’s Civil Rights Department at 202-742-6420 or by filing a report at: http://www.cair.com/report/

The Washington-based civil rights organization launched an app to share critical “know your rights” information and to simplify the process to report hate crimes and bias incidents. CAIR is urging American Muslims and members of other minority groups to download the app and utilize this resource to stay informed and empowered.