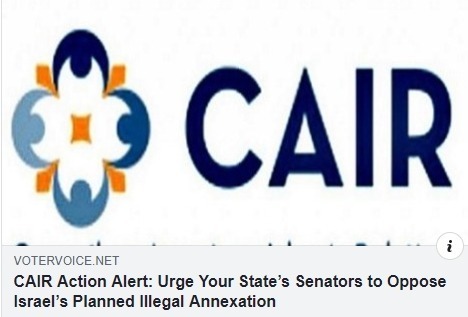 (Washington, D.C., 7/9/20) — The Council on American Islamic Relations (CAIR), the nation’s largest Muslim civil rights and advocacy organization, today applauded U.S. Senator Chris Van Hollen (D-MD) – and the 12 other leading Democratic Senators that joined him – for introducing an amendment that would prohibit the use of any U.S. military funds to be used by the government of Israel in the annexation of Palestinian territories.

The amendment marks an “unprecedented milestone” in the U.S. Senate being the first of its kind to bar the use of U.S. taxpayer funds for Israel’s planned illegal annexation of Palestinian land.

McCaw noted that earlier today CAIR’s Maryland Outreach Office also applauded Sen. Van Hollen for introducing the amendment and called on Senator Ben Cardin (D-Md.), who serves as the senior ranking senator for the state of Maryland to join his Democratic colleagues in supporting the amendment.

According to reports, Israeli Prime Minister Benjamin Netanyahu planned to begin further illegal annexation of the West Bank on July 1, 2020, but has now delayed the process due to international controversy surrounding the intended process and perceived outcome.

Last week, CAIR called on all Americans to urge their members of Congress to take action against the Israeli government’s illegal plan to unilaterally annex more parts of the occupied West Bank and further entrench segregationist rule over Palestinians.

In a letter, CAIR also called on Congress to cut or condition the $4 billion in U.S. taxpayer-funded giveaway to the Israeli government so that our country is not responsible for supporting the planned annexation and enabling a system of apartheid.

According United Nation’s Secretary General António Guterres, Israel’s planned annexation is illegal under international law and would most likely harm any efforts of a lasting peace for the region.

In CAIR’s 25-year history, it has worked to empower American Muslim to defend the civil, human and religious rights of oppressed Muslim communities overseas.