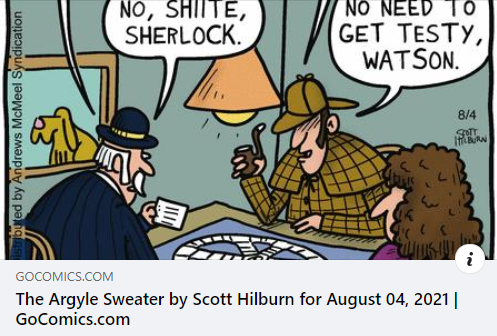 (WASHINGTON D.C., 8/19/2021) – The Council on American-Relations (CAIR) and CAIR’s Kansas chapter (CAIR-Kansas) today called on syndicate and digital entertainment provider Andrews McMeel Universal to drop an offensive anti-Shia cartoon and invited the cartoonist to engage in a dialogue with the Muslim community.

The cartoon — in the series “Argyle Sweater” by cartoonist Scott Hilburn — mocks the name of Shia Muslims with the phrase “No Shiite Sherlock,” and was published in the Kansas City Star and presumably other newspapers nationwide. [NOTE: The phrase “no sh*t Sherlock” is used to indicate something that should have been obvious.]

In a letter to the editor in response to the cartoon, Greater Kansas City Interfaith Council Chair Cindy McDavitt said that by publishing the strip, the Star “aligned itself with other media outlets that actively target Muslims to antagonize them and contributed to making Kansas City an unwelcoming place for our Muslim friends.”

Shia Muslims make up at least 10 percent of the world’s Muslim population, with large populations in Iran, Iraq, Lebanon, and Azerbaijan and as minority communities in other nations.

“At a time when Muslims are targeted by bigotry, cartoons like this contribute to the overall atmosphere of Islamophobia. This cartoon belittles and insults the Muslim community. We call on the syndicate to drop it and invite the cartoonist to take part in a dialogue with the Muslim community to gain greater understanding of Islam and Muslims. Islamophobia must not hide behind misguided attempts at ‘humor.’”

Elbayoumy said he could facilitate that dialogue with community leaders.

“Words can have negative consequences in the lives of ordinary people of all faiths. While we strongly support the First Amendment right to publish even offensive material, common courtesy and respect for others should be the guiding principles at rule in this case.”

Shahbaz noted that CAIR’s first public campaign in the consumer world was launched in 1994 in response to a greeting card containing Islamophobic language, including insults targeting Shia Muslims. That get-well card stated: “So you’re feeling like Shiite. Don’t Mecca big deal out of it.” As a result of CAIR’s campaign, Recycled Paper apologized for the card and ended its production.