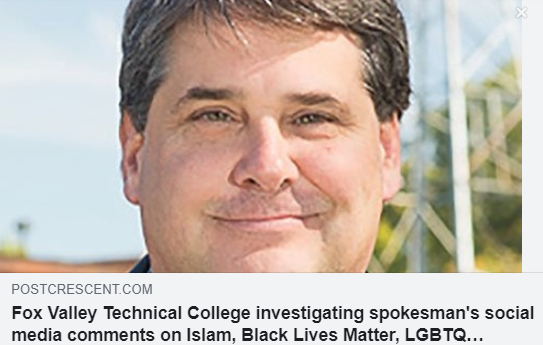 CAIR also welcomed and encouraged the official to directly engage with the Muslim community.

He reportedly called the Black Lives Matter movement “a disgrace” and “get rid of the anti-American filth causing cancer to our nation” on a post about Rep. Ilhan Omar (D-MN), who is a Muslim. Jossart stated: “Islam is all over the world infiltrating every nation, and (Joe) Biden wants their beliefs in our already tainted public school curriculum.” He also called COVID-19 “a hoax from China.”

FVTC President Susan May said Friday: “Comments made by this individual do not represent the views, nor the values, of the College.” In a statement to local media, Jossart apologized “for any offense or harm” his comments caused.

“We urge Fox Valley Technical College to conduct a transparent investigation of this disturbing matter and to take appropriate disciplinary action based on the college’s policies. Everyone has the First Amendment right to free speech, but that right does not guarantee public school employees the right to engage in such bigotry. We also welcome and encourage Mr. Jossart to directly engage with us or other members of the Muslim community so that he can truly learn and grow from this experience.”