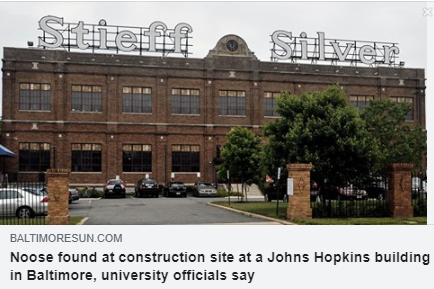 (BALTIMORE, MD, 7/6/20) – The Maryland office of the Council on American-Islamic Relations (CAIR) today called for a hate crime investigation into an incident in which a noose was reported over the July 4th holiday weekend at the construction site of a Johns Hopkins University research facility in Baltimore’s Remington neighborhood.

The discovery was made and reported by representatives of general contractor Plano-Coudon, which has been hired by the university to renovate laboratories in its Whiting School of Engineering.

“It is disturbing hat this symbol of hate representing a gruesome part of history was discovered at an institution of higher learning during Independence Day weekend,” said Director of CAIR’s Office in Maryland Zainab Chaudry. “America gained her independence 244 years ago, but our country is still not free from the racism and bigotry that fuels these crimes. We strongly condemn this deplorable act calculated to intimidate and inspire fear and call on authorities to investigate it as a hate crime and bring the perpetrators to justice.”

Earlier this year, CAIR testified in support of a bill sponsored by Delegate Mark Chang et al. in the Maryland state legislature that aimed to strengthen hate crimes laws in Maryland while upholding First Amendment rights to free speech by making it unlawful to place or inscribe “an item or symbol, including an actual or depicted noose or swastika” on public or private property to threaten or intimidate a person or group of people, without the express permission of the owner or the owner’s agent.

The bill was passed in both the Maryland House of Delegates and Senate and enacted into law on May 8, 2020.