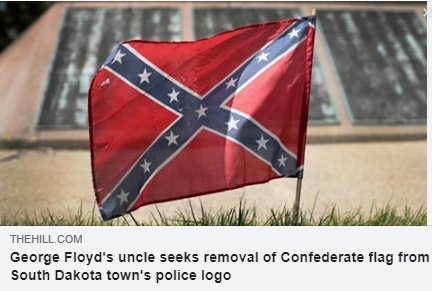 (WASHINGTON, D.C., 7/1/20) – The Council on American-Islamic Relations (CAIR), the nation’s largest American Muslim civil rights and advocacy organization, today joined the call by George Floyd’s uncle and others that the police department of Gettysburg, S.D., remove an image of the Confederate flag from its logo.

Selwyn Jones, one of the few Black residents of Gettysburg, says he will attend a city council meeting next week that will take up removing the Confederate flag from police uniforms.

“All remnants of racism and white supremacy should be removed from places of honor in our society, and particularly from the uniforms of those who are charged with serving and protecting a diverse community.”

He said CAIR and the American Muslim community are standing in solidarity with all those challenging anti-Black racism and white supremacy. CAIR recently unveiled a Black Lives Matter banner containing the names of hundreds of victims of racist police violence, including George Floyd.