CAIR Calls for Resignation of Alaska Lawmaker Who Claimed Hitler was Not a White Supremacist, Compared COVID-19 Measures to Nazi Rule 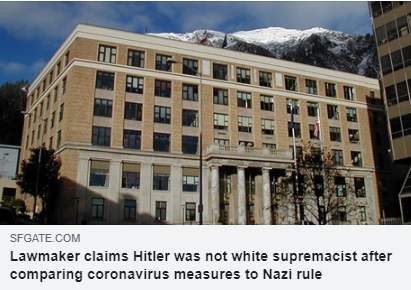 (WASHINGTON, D.C., 5/17/20) — The Council on American-Islamic Relations (CAIR), the nation’s largest Muslim civil rights and advocacy organization, today called for the resignation of an Alaska lawmaker who claimed Hitler was not white supremacist and compared COVID-19 safety measures to Nazi rule.

Republican Rep. Ben Carpenter condemned the requirement for health screening stickers for lawmakers returning to the Alaska Capitol, stating: “Are the stickers available as a yellow Star of David?” [NOTE: Carpenter was referring to the symbol the Nazis forced Jews to wear so that they could be identified and targeted by additional anti-Semitic policies.]

Following backlash to this comment, in an interview with the Anchorage Daily News, Carpenter stated: “People want to say Hitler was a white supremacist. No. He was fearful of the Jewish nation, and that drove him into some unfathomable atrocities.”

“Anyone who holds such abhorrent anti-Semitic views should not be formulating policy for any state in our nation,” said CAIR National Communications Director Ibrahim Hooper. “Representative Carpenter should resign and make way for someone who will seek to unify our nation at a time of crisis, not attempt to politicize a pandemic that is targeting all Americans, regardless of political beliefs.”

He noted that CAIR has reported an unprecedented spike in hate incidents targeting American Muslims and members of other minority groups since the election of Donald Trump as president.

White supremacists and neo-Nazis have seized on the growing pandemic to promote their racist views.

SEE: Conspiracy Theorists, Far-Right Extremists Around the World Seize on the Pandemic

The Washington-based civil rights organization is also hosting a live 30-minute “Daily Dose: COVID Conversations with CAIR” Monday through Friday at 3 p.m. (ET) on Facebook. Recordings of those conversations will be available on the CAIR Newsroom portal.