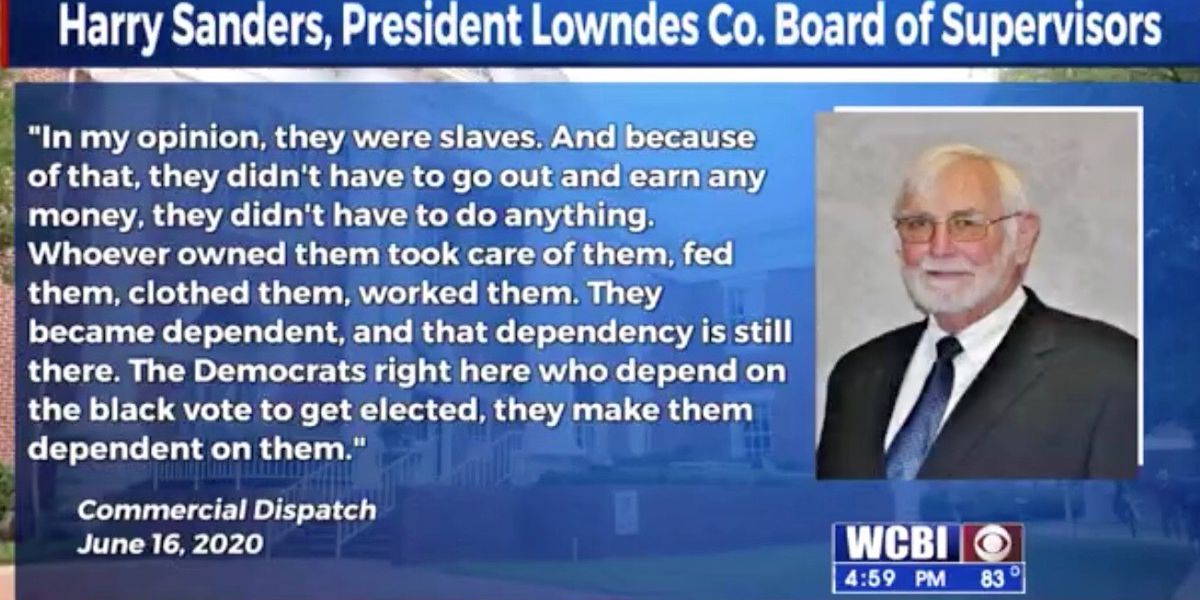 Sanders made racist remarks to a local newspaper after voting against relocating a Confederate monument in front of the county courthouse.

“In my opinion, they were slaves, and because of that, they didn’t have to go out and earn any money, they didn’t have to do anything,” Sanders said. “Whoever owned them, took care of them, fed them, clothed them, worked them. They became dependent, and that dependency is still there. The Democrats right here who depend on the Black vote to get elected, they make them dependent on them.”

“We didn’t do the Japanese right here in World War II, we put them all . . . in a concentration camp and everything and nobody said a damn word about it today,” he said. “Are the Japanese all upset about that, burning stuff down and all that? No, they’ve (been) assimilated into the country and they are doing fine. The only ones that are having the problems, guess who? The African Americans.”

SEE: ‘It’s what I think’: Mississippi official doubles down on racist comments after Confederate statue vote

“Our nation’s leaders and policy-makers – at the local, state and federal levels – must understand and take part in the growing movement against anti-Black racism and white supremacy,” said CAIR National Communications Director Ibrahim Hooper. “Mr. Sanders should resign and make way for someone who will uphold American values, not those of the Confederacy.”

Hooper added that CAIR recently joined the growing call to remove a Confederate symbol from the Mississippi state flag.

He noted that CAIR and the American Muslim community are standing in solidarity with all those challenging anti-Black racism.


Nihad Awad: In Solidarity with Our African-American Brothers and Sisters