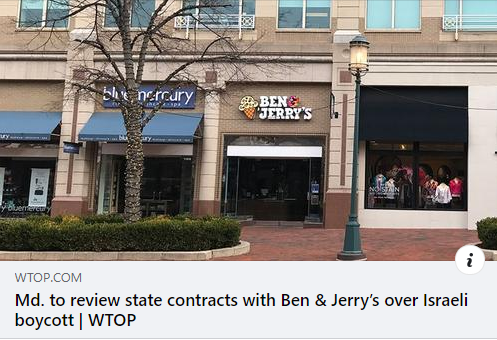 (BALTIMORE, MD, 8/5/2021) – The Maryland office of the Council on American-Islamic Relations (CAIR), the nation’s largest Muslim civil rights and advocacy organization, today called on Maryland Secretary of State John Wobensmith to immediately withdraw his “baseless and unconstitutional” threat to take state action against Ben & Jerry’s in response to the company’s recent announcement that it would halt business operations in illegal Israeli settlements on Palestinian land.

“CAIR is deeply concerned and alarmed by your recent statement that Maryland is reviewing state contracts with Ben & Jerry’s over its decision to no longer sell its products in Palestinian Territories that are internationally recognized to be illegally occupied by the state of Israel. Our government should not be in the business of unconstitutionally punishing any companies or persons for boycotting foreign governments including Israel, which has been accused by respected human rights groups of committing crimes of apartheid. We urge you to reconsider your decision.

Mr. Jeremy Ben Ami, the president of J Street, a prominent Jewish organization, recently wrote in part on Ben & Jerry’s decision: ‘My fondest hope is that Israel will be a secure, just, democratic national home for the Jewish people, something it can never be if it permanently holds the territory it occupied in 1967 without providing the people who live there with full and equal rights. So when Ben & Jerry’s says it wants to sell ice cream in Israel but not in the settlements, that seems — to me — a rational and principled, even pro-Israel, position.’

In fact, Ben & Jerry’s has explicitly stated that it is not boycotting Israel. While it is pulling out of illegal settlements, it will continue to sell its products in Israel. Even if Maryland’s anti-boycott executive order were constitutional, and it clearly is not, the order would not apply in this situation because Ben & Jerry’s is not actually boycotting Israel.”

“The Secretary of State should be focused on things that are more important than ice cream,” said CAIR attorney Gadeir Abbas. “The fact that Mr. Wobensmith is not underscores the folly of these illegal anti-BDS laws.”

In 2019, CAIR launched a legal challenge to Maryland’s anti-BDS executive order on behalf of a former Maryland lawmaker Syed Saqib Ali, stating that it is a violation of the First and 14th Amendments to the Constitution.

“Our government should not be in the business of chilling free speech by punishing companies that choose to take principled positions on human rights issues,” said CAIR’s Maryland Director Zainab Chaudry. “The U.S. Constitution is the law of our land. The rights it guarantees must be preserved and upheld against the racist and illegal policies of foreign governments – including Israel.”

At least 26 states have passed unconstitutional anti-BDS measures requiring entities to sign loyalty oaths to Israel before they can be eligible to contract with the state.

CAIR has filed numerous lawsuits challenging these executive orders. In the past, CAIR, ACLU of Maryland and Freedom to Boycott, Maryland Chapter published a joint opinion piece in the Baltimore Sun urging Governor Hogan to rescind the unconstitutional order in its entirety.