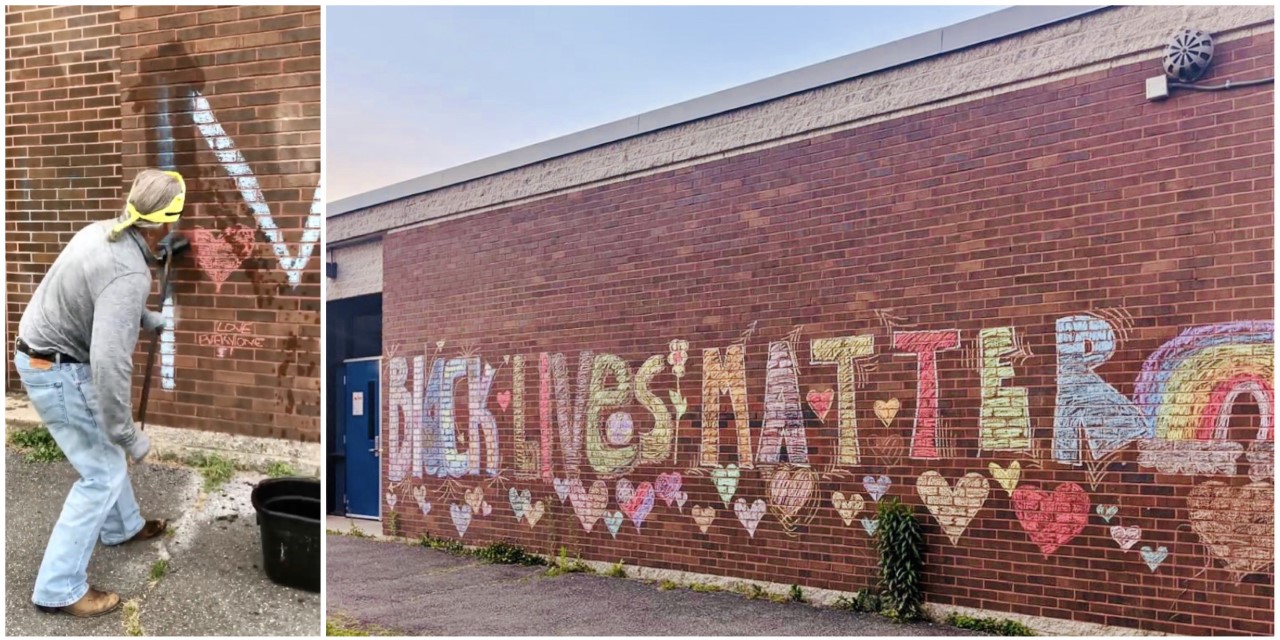 (Baltimore, Md., 6/17/20) – The Council on American-Islamic Relations (CAIR) today called on the off-duty police officer responsible for singling out and scrubbing off Black Lives Matter chalk art from other messages posted on the exterior wall of Hillcrest Elementary School in Catonsville, Maryland, to apologize for his actions. The civil rights organization also condemned racist graffiti, including an offensive slur and an image of a noose discovered on the property of Walt Whitman High School in Bethesda.

Earlier this week, Catonsville residents reported that Black Lives Matter messaging on the building of Hillcrest Elementary School was singled out from among messages to teachers and students and erased multiple times, first by Baltimore County Public Schools’ Facilities Management, and later by an off-duty police officer who appeared with a water bucket and brush to scrub them off.

According to social media posts, the BLM messages were inspired by a 13-year-old boy who wanted to help his younger sister, who is Black, feel welcome at school after he saw other chalk art on the building. But some community members took issue with his message and complained to the county school system, who dispatched a facilities staff member to “resolve the problem.”

When students and parents learned what happened, several people went back to the school to re-drew more solidarity messages. Later, a white male later identified by Baltimore County police as an off duty police officer appeared and was video recorded by bystanders scrubbing off the Black Lives Matter message, saying “It doesn’t belong here.”

The video was shared in a Facebook group and motivated parents and students to arrive to the school and re-draw more solidarity chalk art, thereby launching a cyclic community-based effort to “erase hate with an act of love.”

In a separate incident this week, two teens and one adult have been charged after turning themselves in to police for vandalizing school property at Walt Whitman High School.  One of the teens reportedly confessed that he thought it would be “fun to have something make the news” given the protests and uprisings after George Floyd’s murder on May 25 in Minneapolis, MN.

“These appalling incidents amidst a long string of high-profile hanging deaths and officer-involved killings of Black men, women and teens are an urgent reminder of the pressing need for increased anti-racism work, dialogue and education,” said CAIR’s Maryland Director Zainab Chaudry. “Catonsville’s motto is ‘Life is great in 21228’ but it can’t truly be great until we eradicate bigotry and racism. We commend the efforts of residents who stepped up to challenge and report hate, and call on the off-duty officer to be publicly identified and to apologize for his actions.”

The Hillcrest Elementary School incident occurred amidst reports that high school students organizing a Black Lives Matter demonstration in Catonsville for Monday, June 22 have also had to endure intimidation and the possibility of counter-protests at the rally. CAIR is in touch with law enforcement and helping coordinate security and logistics for the youth-led demonstration.

Walt Whitman High School Principal Robert W. Dodd said that the school had covered up the graffiti and notified the police, emphasizing that racist and destructive behavior will not be tolerated in the school community. He added there will be serious consequences by perpetrators of these crimes who may face additional charges from Montgomery County Police.