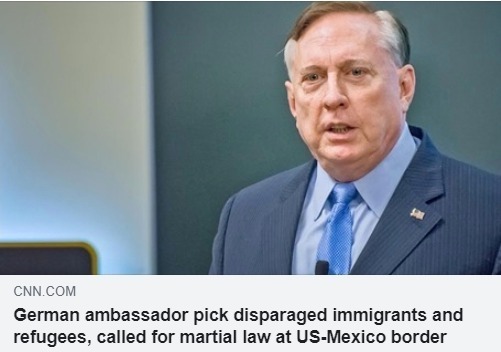 Macgregor has a long history or making violent anti-Muslim, anti-Mexican and anti-immigrant remarks.

While Macgregor’s nomination hearing has not yet been scheduled, CAIR is calling on Republican Foreign Relations Committee Chairman Jim Risch (Idaho), Ranking Member Bob Menendez (New Jersey), and their fellow committee members to reject Macgregor’s nomination on the grounds that his xenophobic, racist and anti-Muslim remarks and should disqualify him from serving as U.S. Ambassador to Germany.

In a statement that was sent today to the staff and members of the U.S. Senate Committee on Foreign Relations by CAIR Director of Government Affairs Department Robert S. McCaw:

“CAIR is calling on the members of the U.S. Senate Committee on Foreign Relations to oppose the nomination of anti-Muslim and anti-immigrant racist Douglas Macgregor for the position of U.S. Ambassador to Germany.

“Macgregor’s repeated verbal attacks on German Chancellor Angela Merkel and his long history of making Islamophobic and conspiratorial  remarks about Muslim refugees fleeing to Europe – disparaging Muslims as ‘invaders’ ‘coming to take over’ and with the goal of ‘turning Europe into an Islamic State’ – makes him totally unfit to serve as U.S. ambassador to a long standing ally like Germany.

“Last week the U.S. Senate Armed Services Committee — in a bi-partisan manner — rejected Anthony Tata, another Islamophobic Trump nominee to a position in the Department of Defense, we call on Senate Foreign Relations Committee to likewise reject Macgregor.”

In 2016, Macgregor said on an internet radio show that Muslim refugees are “not coming to assimilate and become part of Europe” but come “with the goal of eventually turning Europe into an Islamic State” adding “That’s a bad thing for the West. It’s a bad thing for Europeans.”

In 2015, Macgregor similarly said on ABC News that Muslim refugees in Europe “are not coming to assimilate or become Europeans – quite the opposite. They’re coming to take over whatever they can get.”

On that same program, Macgregor also stated the United States has “more than 9 million Muslims” and “I would be surprised if some were not inspired by the Islamic State.”

According to CNN’s KFile and its review of dozens of radio and television interviews, Macgregor also opposed the United States’ 1995 NATO-led military intervention against Serbian forces who by then murdered some 8,000 Bosnian Muslims, because it according to him, it “put, essentially, a Muslim drug mafia in charge of that country.”

Macgregor has also attacked Mexican immigrants to the U.S. stating that cartels were “driving millions of Mexicans with no education, no skills and the wrong culture into the United States, placing them essentially as wards of the American people.” According to CNN’s KFile, Macgregor also “repeatedly advocated to institute martial law at the US-Mexico border and ‘shoot people’ if necessary.”

CAIR notes that in 2017,  it called for the resignation of Pete Hoekstra, the United States ambassador to the Netherlands, who told a reporter it was “fake news” that he said there are Muslim “no-go zones” in that country and then lied about making the fake news charge when presented with video evidence of his anti-Muslim comments.