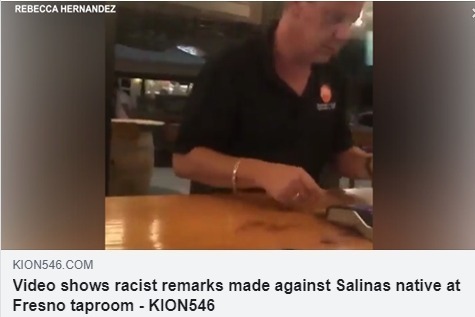 (FRESNO, CA, 7/9/20) – The Central California office of the Council on American-Islamic Relations (CAIR-CC) today condemned a customer’s racist tirade directed at a server at a Fresno bar in an incident caught on video.

On Tuesday night, an Out of the Barrel Taproom customer, who identified himself as Florida businessman Jason Wood, started ranting at server Rebecca Hernandez when she refused to continue serving him. He had allegedly been refusing to wear a face mask.

Hernandez recorded the incident on video, which shows Woods saying to Hernandez, “You’re a dark-haired dumbass, sand-n—-r motherf—-r.” He eventually says, “I’m leaving, don’t worry about me. Don’t worry about me, Saudi Arabia.” Hernandez asks if he was calling her Saudi Arabian, to which Wood responded, “you’re f—–g stupid like they are.”

“We condemn this sickening racist tirade. To endanger the lives of the staff by not wearing a protective face mask amid the COVID-19 pandemic, and then to verbally attack them in such a heinous way is disturbing and appalling. We are glad Ms. Hernandez caught the incident on video and documented the customer’s atrocious behavior. All of us must call out bigotry and hatred whenever and wherever we witness it.”