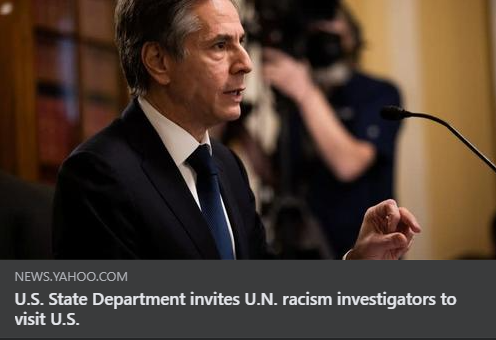 (WASHINGTON D.C., 7/14/2021) – The Council on American-Islamic Relations (CAIR), the nation’s largest Muslim civil rights and advocacy organization, today commended an invitation by the U.S. State Department to U.N. experts who investigate racism and minority issues to conduct an official visit to the United States.

Secretary of State Antony Blinken said, “Responsible nations must not shrink from scrutiny of their human rights record; rather, they should acknowledge it with the intent to improve.”

Blinken urged all U.N. member states to the join the United States and confront racism, racial discrimination, and xenophobia. He said the United States welcomed the U.N. Human Rights Council’s adoption of a resolution Tuesday to address systemic racism against Africans and people of African descent in the context of law enforcement.

The invitation to the U.N. Special Rapporteurs on racism and minority issues is the first step in a plan to issue a standing invitation to all U.N. experts reporting on human rights issues.

“We commend the State Department for taking this important step by opening our nation’s borders to experts working to combat racism and racial discrimination,” CAIR Government Affairs Director Robert McCaw said. “The injustices suffered by members of minority communities in this country and around the world must be recognized and adequately addressed.”

He noted that CAIR has called on the Senate to pass the George Floyd Justice in Policing Act, which would be an important first step in addressing the systemic problem of police killings, violence, and profiling targeting Black Americans.