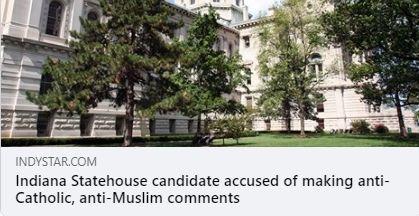 (WASHINGTON, D.C., 10/29/2020) — The Council on American-Islamic Relations (CAIR), the nation’s largest Muslim civil rights and advocacy organization, today condemned past anti-Catholic and anti-Muslim remarks by an Indiana statehouse candidate and welcomed plans to remove a large confederate flag along I-95 in Stafford County, Va.

In Indiana, statehouse candidate John Jacob (R) allegedly made Facebook posts condemning both Roman Catholic and Islamic parishioners. He is expected to win the Indiana House District 93 in southern Marion County and Johnson County. Jacob’s comments included, “the Islamic faith cannot coexist in the United States, Muslims are traitors who should be deported, and the Roman Catholic Church is a cult and of Satan, its parishioners should repent and leave the church, and the pope is an anti-Christ.”

In Virginia, the Virginia Department of Transportation (VDOT) has acquired the portion of land previously rented by Virginia Flaggers, the group that flew a large Confederate flag. The group reportedly has until Oct. 30 to remove it, or VDOT will take it down and return it to them. The Confederate flag hangs from an 80-foot pole and is located between Richmond, Va. and Washington, D.C.

SEE: Confederate flag along I-95 in Stafford to be removed

“Hatred and bigotry must be challenged whenever and wherever they surface in our society. Americans of all backgrounds and faiths should unify in repudiating the promotion of hate and division, whatever the source.”

She added that the American Muslim community and CAIR are standing in solidarity with all those challenging Confederate symbols, anti-Black racism, xenophobia, Islamophobia, anti-Semitism, and white supremacy.