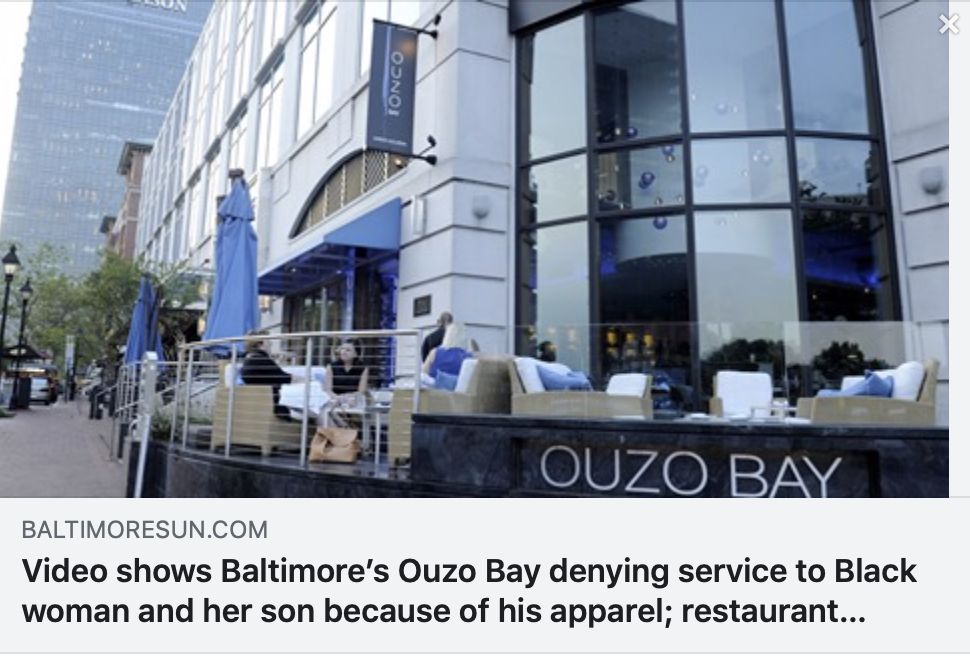 (BALTIMORE, MD, 6/23/20) – The Maryland office of the Council on American-Islamic Relations (CAIR) today condemned an incident that occurred over the weekend at an upscale Baltimore restaurant involving a young, Black boy who was denied service for “not being dressed to code,” although his attire was very similar to athletic apparel worn by a white boy of around the same age who had in fact been served.

SEE: Ouzo Bay owners apologize after video shows restaurant denying service to Black woman and her son because of his apparel

In a video uploaded to social media by the young boy’s mother, and shared with CAIR, she is heard asking the manager to explain why her son is being treated differently, and why his clothing – a black Air Jordan t-shirt, black shorts and sneakers – violates the dress code when the athletic style apparel worn by the white boy did not. The manager stumbles through a response – even going so far as to ask the mom if she lives nearby and can go home to change her son’s clothing.

This is not the first incident that Atlas Restaurant Group, which operates twelve high-end venues in Baltimore, has come under fire for allegations of racism. Last year, they were blasted in viral social media posts for a “blatantly discriminatory” and racist dress code policy printed on a piece of paper and posted outside a new Baltimore venue, Choptank. The note listed the following items, among others, as STRICTLY PROHIBITED: “excessively baggy clothing,” “brimless headgear,” “backwards or sideways hats” and jerseys.

SEE: Baltimore Restaurant Group Under Fire for Racist Dress Code Is Going to Tell People What to Wear in D.C. Too

While the civil rights organization welcomes an apology from Atlas for the mom and her son, and their decision to amend their dress code policy so it does not apply to children under 12 effective immediately, it is also calling for the resignation of the unidentified manager seen in the video and an overhaul of Atlas’ dress code policies in consultation  with Black-led advocacy organizations in the city.

“The video evokes the stained legacy of Jim Crow laws that enforced racial segregation in America,” said CAIR’s Maryland Director Zainab Chaudry. “This young boy should never have had to experience this kind of discrimination. Apologies and staff training won’t erase the impact of this appalling experiencing from this child’s mind. Businesses who are committed to creating a culture of inclusivity need to demonstrate it through their hiring decisions and policies.”