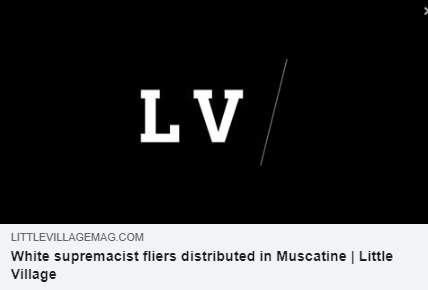 (WASHINGTON, D.C., 5/14/20) – The Council on American-Islamic Relations (CAIR), the nation’s largest Muslim civil rights and advocacy organization, today condemned the distribution of white supremacist materials in Iowa and a racist threat in Virginia.

CAIR said the racist and xenophobic messages left on lawns and driveways in Muscatine, Iowa, called for the expulsion of immigrants because they “can’t make white babies.” The materials were distributed by the white supremacist group National Alliance. This is allegedly the fifth incident in which this group has distributed racist material.

The Washington-based civil rights organization today also condemned a racist social media post that included a photo of two white teens, one of whom is holding a gun. The caption with the post read, “Let’s hunt some (n——)”.

Virginia’s Hanover County Public Schools reported the post to law enforcement authorities but could not disclose whether the individuals involved were Hanover County Schools students.

“All Americans must push back against the rise of white supremacy and all other forms of bigotry we are witnessing nationwide,” said CAIR National Communications Coordinator Ayan Ajeen. “The actions of racist and xenophobic groups across the country indicate that they see an opportunity to spread their hatred by exploiting the fear and suffering caused by the ongoing coronavirus pandemic.”

SEE: Conspiracy theorists, far-right extremists around the world seize on the pandemic

She noted that CAIR has reported an unprecedented spike in bigotry targeting American Muslims, immigrants and members of other minority groups since the election of Donald Trump as president.