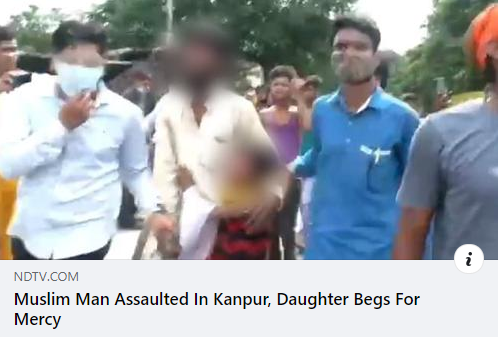 (WASHINGTON, D.C., 8/12/21) – The Council on American-Islamic Relations (CAIR), the nation’s largest Muslim civil rights and advocacy organization today condemned the latest series of anti-Muslim attacks in India and urged the U.S. Department of State to designate India a “country of particular concern.”

According to New Delhi Television (NDTV), a 45-year-old Muslim man was paraded through a street, assaulted and made to chant “Jai Shri Ram” (“Glory to Lord Rama”) slogans in Uttar Pradesh’s Kanpur Town. The video shows the man’s little daughter clinging on to him and begging the attacks to spare her father.

On Tuesday, Al Jazeera reported that six people, including a spokesman of India’s governing right-wing party, were arrested over anti-Muslim slogans in New Delhi. A protest, organized on Sunday by a former Bhartiya Janata Party (BJP) leader and Supreme Court lawyer Ashwini Upadhyay led a demonstration against Muslims with a mob of over 100 people calling for violence against the community in Jantar Mantar (a Mughal-era observatory). Videos purportedly from the event showed a mob saying Muslims were “pigs” and calling for the “mass slaying” of the minority.

A right-wing Hindu organization, Kranti Sena, also organized a group of men to conduct a “surprise drive” to ensure Muslims were not painting henna decorations on Hindu women’s hands.

UP: Outfit conducts ‘drive to ensure no Muslim applies mehndi to Hindu women on Teej’

“The attacks by right-wing Hindutva mobs on Muslims in India, along with other hate incidents targeting Indian Muslims, are extremely concerning considering Muslims make up a substantial portion of the Indian population. It is vital that the United States does everything it can to ensure the safety and security of Muslims in India and around the world,” said CAIR Research and Advocacy Coordinator Huzaifa Shahbaz. “We urge the State Department to take these Islamophobic actions seriously and designate India as a ‘country of particular concern.’

In April 2020, CAIR welcomed the United States Commission on International Religious Freedom’s (USCIFR) condemnation of India’s violations of religious rights, particularly those of its Muslim community.

And in September 2020, CAIR joined dozens of civil and human rights organizations in demanding that Facebook be held accountable for its willful and deliberate neglect to address anti-Muslim hate speech on its platform in India.