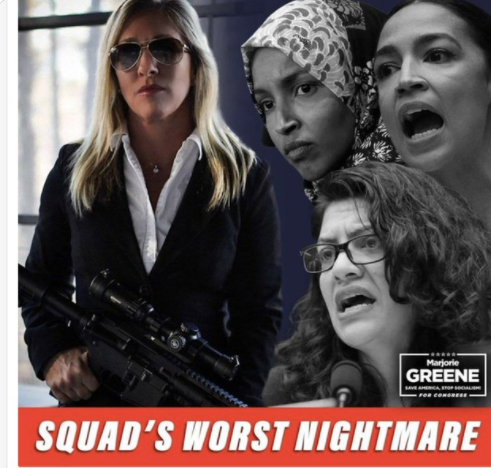 SEE: Trump-Backed QAnon Candidate Posts Meme Showing Off Gun And Urging ‘Going On The Offense’ Against AOC, The Squad

Greene’s Facebook post depicted a meme of her holding an assault rifle with pictures of the three congresswomen the caption “SQUAD’S WORST NIGHTMARE,” and a post that read in part:

“We need strong conservative Christians to go on the offensive against these socialists who want to rip our country apart. Americans must take our country back.”

“As the nation struggles with the continued threat of violence perpetrated by far-right extremists pointing the same type of assault rifle that Greene was depicted holding, it is unconscionable that she would make such a threatening statement.

“CAIR is calling on the U.S. Capitol Police to investigate this incident as a threat of violence against these members of Congress.

“It is unconscionable that Capitol Police may have to develop a plan to physically protect some members of Congress from the apparent violent threat posed by other elected representatives and their supporters.”