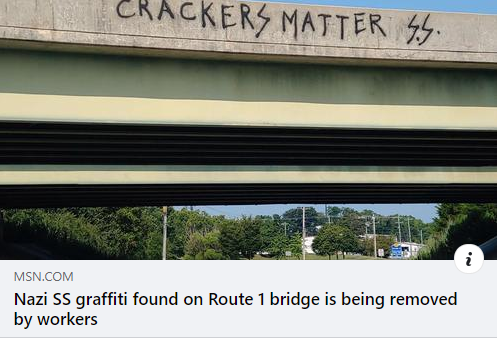 SEE: Nazi SS graffiti found on Route 1 bridge is being removed by workers

Wednesday morning, Delaware Dept. of Transportation workers were made aware of the graffiti, which included the phrase ‘Crackers Matter’ and the double lightning bolt insignia of Nazi Germany’s SS. It was removed later that afternoon. Delaware State Police say they are investigating the incident, but do not currently have any suspects or leads. A spokesman for the department said that if any similar graffiti is found in the area, state police would “take the necessary investigative steps.”

The SS was a branch of the Nazi government that was responsible for state security and implementing the Holocaust.

“We condemn this disturbing display of white supremacy and hate,” said CAIR Government Affairs Director Robert McCaw. “As racism continues to grow nationwide, it is the responsibility of people of conscience at all levels of society to challenge it.”