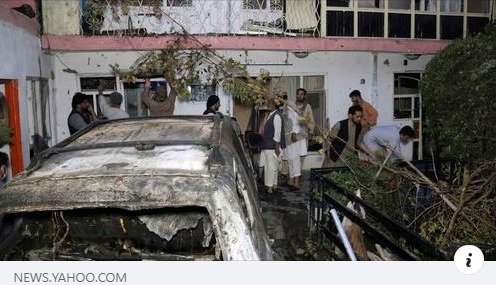 (WASHINGTON, D.C., 11/4/21) – The Council on American-Islamic Relations (CAIR), the nation’s largest Muslim civil rights and advocacy organization, today strongly condemned a Pentagon report that found no violation of law in the August 29, U.S. military drone strike in Kabul, Afghanistan, that killed 10 Afghan civilians, including seven children, and reiterated its call for the Biden Administration to issue a moratorium on drone warfare.

According to the Daily Mail, the U.S. strike killed aid worker Zemari Ahmadi, along with three of his children, Zamir, 20, Faisal, 16, and Farzad, 10; his cousin Naser, 30; three of his brother Romal’s children, Arwin, 7, Benyamin, 6, and Hayat, 2; and two 3-year-old girls, Malika and Somaya.

In a statement by CAIR Director of Government Affairs Director Robert S. McCaw:

“If slaughtering ten innocent Afghan civilians–including a two-year-old girl–is not a crime under American law, then our laws are unjust. It’s unconscionable that the Pentagon can continue to launch drone strikes on innocent people, investigate itself and dismiss a pattern of civilian deaths as ‘honest mistakes’ that do not violate a single law or rule.

“The lawless and unaccountable U.S. drone warfare program must come to an end. The blood of thousands of innocent people killed in Pakistan, Afghanistan, Yemen, and elsewhere in the Muslim word are on our nation’s hands.

“We once again call on President Biden to order a moratorium on drone warfare and publicly detail the Pentagon’s use of drone warfare to engage in targeted killings.”

Following initial reports about the drone strike, CAIR Deputy Director Edward Ahmed Mitchell called on the Biden administration to conduct a transparent investigation and enact a moratorium on the use of drone warfare due to its “longstanding pattern” of causing civilian deaths.

During a Wednesday press conference Lt. Gen. Sami Said, the inspector general of the Air Force, said an Air Force investigation and report concluded the drone strike’s targeting and killing of 10 Afghan civilians was due to “confirmation bias” of the strike team and that “It’s a regrettable mistake. It’s an honest mistake. I understand the consequences, but it’s not criminal conduct, random conduct, negligence.”

Inspector General Said also confirmed the U.S. government would be providing undisclosed “ex gratia condolence payments” to family members of those killed in the strike.

CAIR has expressed solidarity with the Afghan-American community and called on the Biden Administration to do everything possible to welcome Afghan refugees to the United States while protecting Afghan civilians.