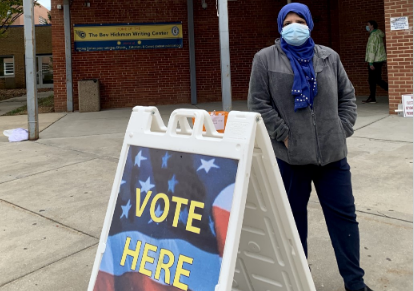 (BALTIMORE, MD, 11/3/20) – The Maryland office of the Council on American-Islamic Relations (CAIR) today condemned the alleged harassment of a visibly-Muslim volunteer at a polling location in Baltimore County, and is encouraging anyone who might have observed or experienced any form of intimidation while voting to report it to the civil rights organization.

The volunteer – a mom of four who wears hijab, or an Islamic headscarf – was volunteering outside of Catonsville High School in Baltimore County, Maryland when a voter started shouting comments including “You know you’re wasting your breath” and “Trump is going to win!”

Shah ignored his comments and eventually instead offered the voter a bottle of water, which he accepted before walking away.

“The volunteer could have chosen to stay home, but she understands what’s at stake in our country and instead chose to be civically engaged,” said CAIR’s Maryland director Zainab Chaudry. “When she was confronted with antagonism, she refused to be intimidated. Instead, she responded with an act of compassion that truly embodies the Islamic faith. Her courage is an example for others to remain steadfast and engaged, and to not be deterred in these tense political times.”

In a statement to CAIR, the volunteer said:

“Not everyone is going to like us. We can’t hide our faces. We are part of America. We live here, our children live here. That’s why this is so important to stand up. To speak out and vote.”

The national office of the civil rights organization has launched an online Voter Complaint Form to provide legal support to those encountering anti-Muslim discrimination or other civil rights violations while voting.

It enables users to receive assistance in voter registration, discrimination at the polls, ID rules by state, voting locations, denial of entry into polls, or anti-Muslim incidents.

Muslims who feel that their rights are violated are encouraged to also contact CAIR at 202-488-8787 or civilrights@cair.com.