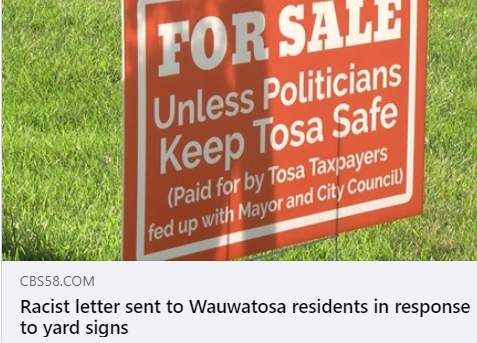 (WASHINGTON, D.C., 9/2/2020) – The Council on American-Islamic Relations (CAIR), the nation’s largest Muslim civil liberties and advocacy organization, today condemns a racist letter that was sent to residents of Wauwatosa, Wis. after a yard sign was misinterpreted to have a racial message.

The yard sign reads, “For Sale Unless Politicians Keep Tosa Safe (Paid for by Tosa Taxpayers fed up with Mayor and City Council).” The letter, addressed to ‘White Wauwatosa Resident’ referencing the yard sign said, “We Whites must stand together, we must keep Wauwatosa free from Blacks and their lack of morels [sic]” and mentioned a need to keep Wauwatosa “white” and “safe.” The letter is signed by someone named a member of “Whites for Wauwatosa.”

“We condemn this racist letter that associates disorder in communities with Black residents. We must make it clear that this disturbing racist and white supremacist ideology is not welcome in Wisconsin or anywhere.”