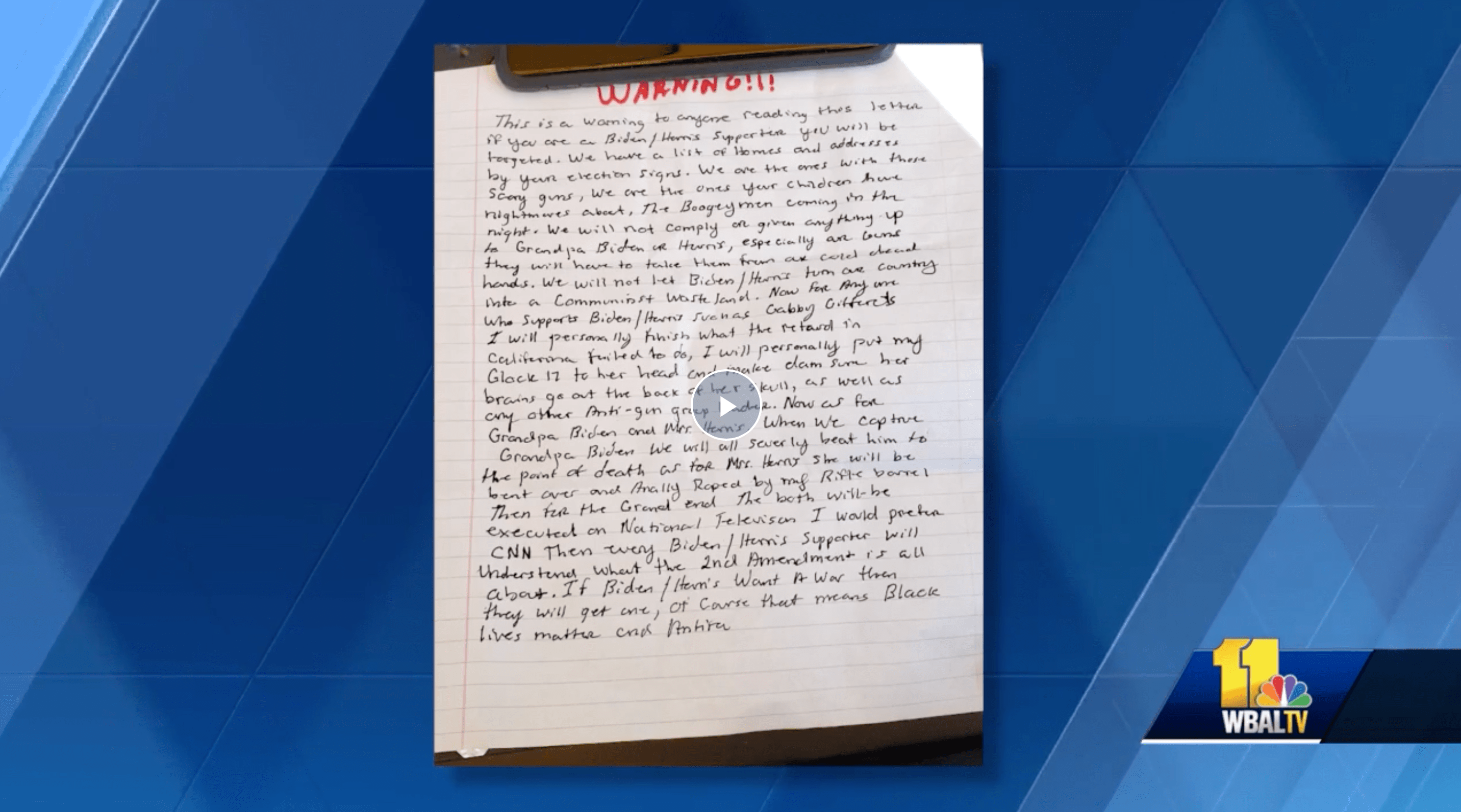 CAIR said the letter targeted a homeowner who displayed a Biden-Harris campaign sign in his front yard. It reportedly read: “If you are a Biden-Harris supporter, you will be targeted. We have a list of homes by your election signs. We will not comply or give anything up, especially our guns.”

The letter was condemned by local parties. “We call on everyone to respect others’ private property rights and their First Amendment right to display their support for the candidate of their choice,” Steven Clark, chairman of the Frederick County Republican Central Committee, said in a statement.

“This letter left outside a Maryland home is an unethical attempt to threaten and intimidate peaceful residents ahead of the election,” said CAIR’s Director in Maryland Zainab Chaudry. “We call on law enforcement authorities and election officials to investigate this incident and urge anyone who witnesses or experiences any form of voter suppression to notify authorities, the state board of elections and CAIR right away.”

“CAIR takes these instances of voter suppression seriously,” said Huzzaifa Muhammad, CAIR’s Government Affairs intern in Maryland. “We will do everything we can to ensure a fair election. This type of behavior is extremely discouraging to see in today’s political climate, but it cannot deter us.”

CAIR is calling on all voters in Maryland to familiarize themselves with tactics that are used to influence the outcome of an election and discourage people and groups from voting, and to immediately report instances of voter suppression to CAIR and the Maryland State Board of Elections.

Voter suppression is a federal crime in the United States. All eligible citizens have the right to cast their vote, but many forms of voter suppression have been used throughout history to prevent groups of people from voting.

The aim of the voter guide is to:

SEE: CAIR Muslims.Vote PSA: What is Your Plan to Vote?

The voter guide and PSA are a part of CAIR’s campaign designed to empower American Muslims by increasing their political capacity and presence in the 2020 General Election.

A recent CAIR survey indicated that 89% of registered Muslim voters intend to vote in the November 3rd General Election.

CAIR recently launched a new section of the 2020 election and voter mobilization website for “Early Voting” and updated its “Vote-by-Mail Guide” to mark National Voter Registration Day for 2020.

IMPORTANT: If you believe your rights have been violated while voting, please contact the Council on American-Islamic Relations at (202) 488-8787 or civilrights@cair.com.