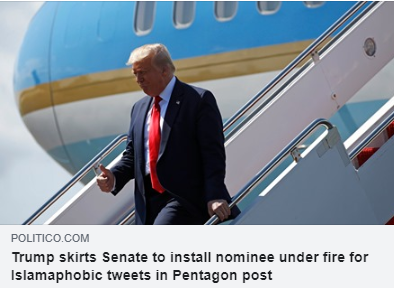 (WASHINGTON, DC, 8/3/20) – The Council on American-Islamic Relations (CAIR), the nation’s largest Muslim civil rights and advocacy organization, today condemned President Trump’s disrespect for the congressional vetting process following the appointment of anti-Muslim bigot and conspiracy theorist Anthony J. Tata to the position of the “official performing the duties of the deputy undersecretary of defense for policy” after his nomination to a similar position experienced a fatal setback in the Senate.

Tata was originally nominated to the position of undersecretary of defense for policy, but his confirmation hearing was canceled last Thursday after Democratic and Republican members of the U.S. Senate Armed Services Committee objected to his anti-Muslim social media posts and attacks against the Obama administration.

“CAIR condemns President Trump’s appointment of anti-Muslim bigot Anthony Tata to a Pentagon post for which he was rejected by Congress,” said CAIR Director of Government Affairs Department Robert S. McCaw. “Tata’s venomous anti-Muslim rhetoric disqualified him from Senate confirmation. By appointing Tata to a similar Pentagon position without Senate confirmation, President Trump has once again shown his embrace of hatred, his hostility towards Muslim Americans, and his lack of respect for Congress.”

Prior to the hearing, ten Democratic committee members — led by Massachusetts Sen. Elizabeth Warren — vowed to oppose the nomination and recently urged Tata to withdraw based on his record of “offensive and inflammatory comments.”

Ranking Democratic committee member Rhode Island Senator Jack Reed has also said he will oppose the nomination prior to the hearing.

In April, CAIR called on members of the Senate Committee on Armed Services to reject President Trump’s then reported Tata’s nomination to the position of undersecretary of defense for policy.

On social media, in a series of since deleted tweets Tata has called former President Barack Obama a “terrorist leader,” sharing an article that claimed Obama was “seditious” and a “Manchurian candidate” working on behalf of foreign powers, and referred to Islam as “the most oppressive violent religion I know of.”

CAIR notes, these far-right conspiracy theories are used as a recruiting tool by white supremacist groups in the UK and Europe.