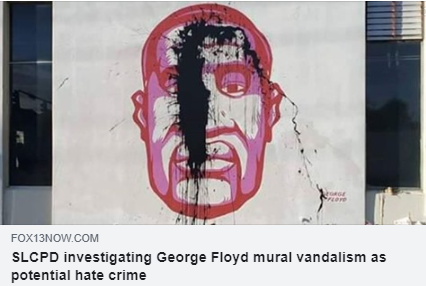 The pop art-style portrait of George Floyd’s face was covered with black tar Sunday. The Salt Lake City Police Department opened an investigation into the vandalism and whether the actions constituted a hate crime. The artists have since repaired the painting.

CAIR also condemned a white supremacy banner hung on I-380 overpass in North Liberty, Iowa, on Juneteenth, the annual celebration of the abolition of slavery in the United States. Drivers saw a banner that read “Reclaim America,” and “Patriot Front US.”

[NOTE: Patriot Front is a white supremacist group founded in 2017.]

In a statement by CAIR National Communications Director Ibrahim Hooper: “We must come together as a nation to condemn and repudiate white supremacy and anti-Black racism.”