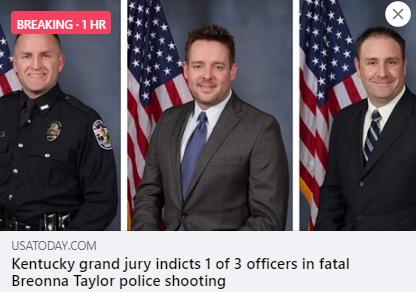 (WASHINGTON, D.C., 9/23/20) — The Council on American-Islamic Relations (CAIR), the nation’s largest Muslim civil rights and advocacy organization, today decried a decision by a grand jury in Kentucky not to charge any officer for the killing of Breonna Taylor.

“We reject this unjust decision by the grand jury and urge federal authorities to intervene in the case,” said CAIR-Kentucky Chair Waheedah Muhammad.

“This is not justice. Innocent people were not merely endangered during this police shooting. An innocent person was murdered. If Kentucky will not hold all the responsible officers accountable for the death of Breonna Taylor, the Justice Department must do so.”

CAIR Calls for ‘Immediate Action’ Against Wisconsin Officers Who Tased, Shot Unarmed Black Man Jacob Blake in Back, in Front of Children