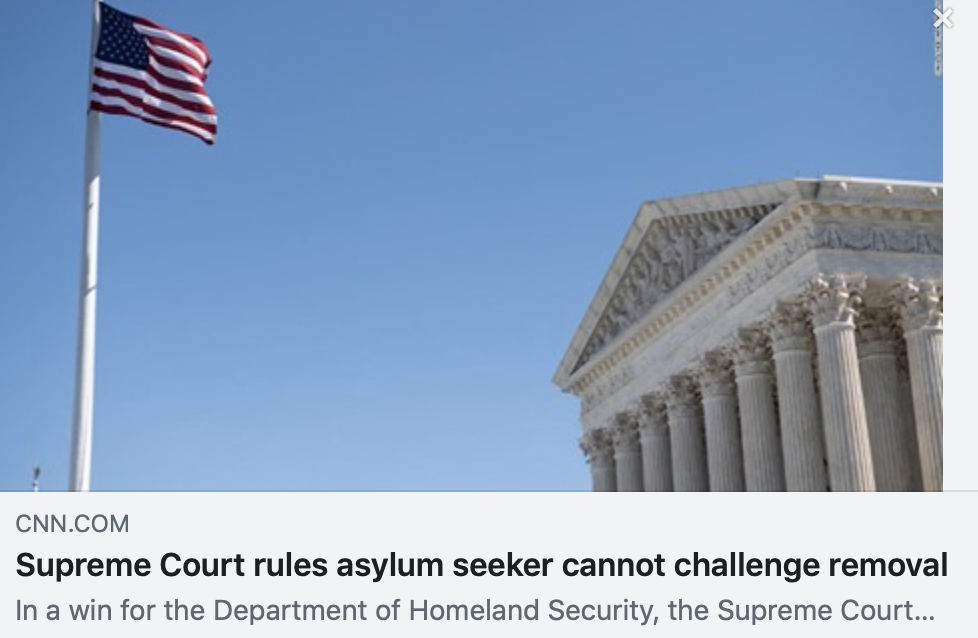 “This ruling will impact the lives of countless asylum seekers who would have otherwise been entitled to habeus corpus, protecting them from unlawful imprisonment. The ruling will allow the U.S. Government to deport asylum seekers back to countries where they fled severe persecution. Many asylum seekers may be subject to torture and death.

“Further, the ruling emboldens Trump’s anti-immigrant rhetoric and policies that seek to ban immigrants from entering this country.

“As with the Muslim Ban, the Trump administration’s attempts to terminate the protections we afford asylum seekers is fueled by a hatred for people of color and driven by the demands of anti-immigrant extremists.”

“The right of habeas corpus is one of our most cherished rights, going back to thirteenth century England and being seen as so important that it was expressly enshrined in our Constitution even prior to the Bill of Rights.  It is disappointing to see the Court so cavalierly toss this right aside for asylum seekers, who most desperately need this right. Asylum seekers represent the very founding principles of our country as a haven from oppression. Congress must act quickly to undo this travesty to the Constitution and to human rights alike.”

In a major legal defeat for U.S. asylum seekers, Supreme Court Justice Samuel Alito states in his decision, “Most asylum claims, however, ultimately fail, and some are fraudulent. In 1996, when Congress enacted the Illegal Immigration Reform and Immigration Responsibility Act (IIRIRA), it crafted a system for weeding out patently meritless claims and expeditiously removing the aliens making such claims from the country.”

In the dissent, Justice Sonia Sotomayor, who was joined by Justice Elena Kagan wrote: “Today’s decision handcuffs the judiciary’s ability to perform its constitutional duty to safeguard individual liberty and dismantles a critical component of the separation of powers.”

Because of this decision, asylum seekers in expedited removal processes will no longer have an opportunity to challenge their deportation in federal court.

Vjayakumar Thuraissigiam, an asylum seeker and member of the Tamil ethnic minority group in Sri Lanka, detailed persecution in his home country when government officers abducted and beat him, subjected him to simulated drowning, and threatened to kill him. The asylum officer determined he had not established a credible fear of persecution, a supervising officer and immigration judge affirmed. Mr. Thuraissigiam was placed in expedited removal.

The expedited removal process is applied to individuals who unlawfully enter the United States and can be ordered removed without further hearing or review. If an individual seeks asylum, they are provided additional screening to determine whether they have a credible fear of persecution or torture if returned to their home country.

The ACLU filed a petition for habeaus corpus review of Mr. Thuraissigiam’s removal order by the federal judge. The U.S. government challenged the petition on the grounds that neither the Constitution nor the writ of habeas corpus guarantee judicial review to asylum seekers like Mr. Thuraissigiam.

The Ninth Circuit reversed the district court’s dismissal for lack of jurisdiction and concluded that the expedited removal statute violated the Suspension Clause.

The case then made its way to the U.S. Supreme Court.