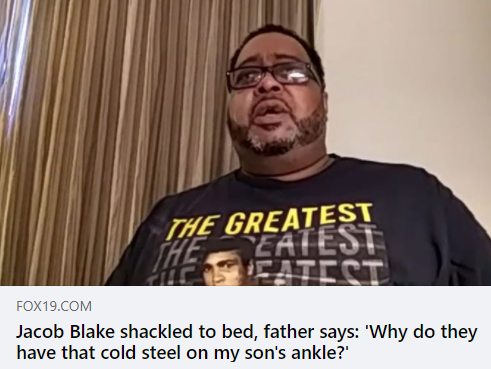 (WASHINGTON, D.C., 8/28/20) — The Council on American-Islamic Relations, the nation’s largest Muslim civil rights and advocacy organization, today demanded that law enforcement authorities end their “torture” of Jacob Blake, who is reportedly shackled to his hospital bed

Blake’s father told CNN that despite the fact that his son cannot walk due to injuries suffered in the recent Kenosha, Wis., police shooting, authorities have him shackled to the bed.

SEE: Jacob Blake shackled to bed, father says: ‘Why do they have that cold steel on my son’s ankle?’

“Shackling an unconscious man who cannot walk — as a result of police brutality — to his hospital bed is an act of torture. The use of handcuffs only compounds the injustice done to Mr. Blake and sends the false message that he, not the officer who shot him seven times in the back, poses a danger to society. The shackles on Jacob Blake must be removed, and local authorities must treat him with the respect he deserves as both a medical patient and a human being.”