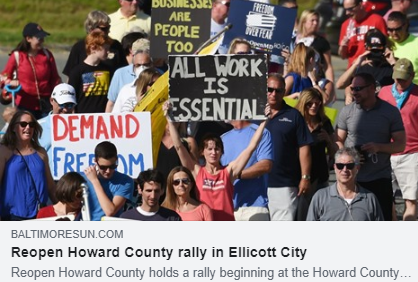 On the same day that George Floyd was murdered in Minneapolis, Minn., a white woman called 911 to report false accusations against a Black man in Central Park and a white supremacist group’s recruitment flyers were discovered in parts of Maryland, a group of white protestors in Howard County, Md., joined some local elected officials carrying ‘Blue Lives Matter’ signs and wearing t-shirts reminiscent of misogynistic tropes meant to emasculate and demean his character.

The rally, organized by the group Reopen Howard County, was designed to urge County Executive Calvin Ball to “reopen local businesses and churches” temporarily closed due to the coronavirus pandemic.

“The tone-deaf, racist tropes and personal attacks against County Executive Ball go beyond mere politics and are emblematic of a deplorable national trend of hateful rhetoric and violence targeting America’s black communities,” said CAIR’s Director in Maryland Zainab Chaudry. “In these challenging times, we can’t simply sit on the sidelines and claim to not be racist. We must actively be anti-racist. We must do the hard work to demonstrate how we individually are challenging and dismantling racism in our circles of influence.”

The Muslim Community Center of Maryland also issued a statement expressing its shock and disgust over this incident. In a statement, it said in part:

“Today we stand by Dr. Calvin Ball and the African American community.  We pray for his safety and continued leadership. The MCC continues to categorically reject the ideologies and speech of those who spread hate, as well as the horrific acts of violence their words give license to. While these t-shirts with the racist and offensive slogan were created by the event organizers, we cannot overlook the elected officials who supported this slogan and by their conspicuous silence tacitly approved of the hateful message being delivered on the t-shirts that were clearly visible all around them.”