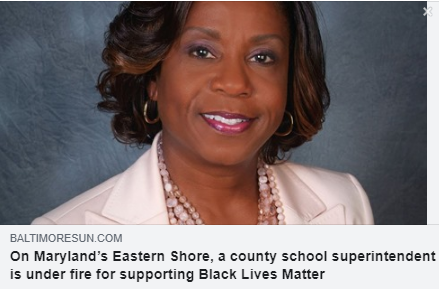 (BALTIMORE, MD,8/9/20) – The Maryland office of the Council on American-Islamic Relations (CAIR) today announced that it stands in solidarity with Maryland school superintendent, Dr. Andrea Kane, who is under fire for supporting the Black Lives Matter movement.

According to the Baltimore Sun, Dr. Kane, who is the first Black superintendent of Queen Anne’s County Public Schools, sent an email message two months ago to parents regarding achievements of the 2019-20 school year and upcoming events. Additionally, Kane called for further detailed information regarding racism in the county and voiced her support for the Black Lives Matter movement.

Dr. Kane was immediately attacked, and many called for her removal as superintendent. Some parents upset with her message went on to say, “Queen Anne’s county has no significant problem with racial hatred”, going as far as making a Facebook group labeled “Kent Island Patriots” and accusing Dr. Kane of breaking the law.

In a recent board of education meeting, Dr. Kane reportedly defended her decision, saying: “With such small percentages of students of color here in Queen Anne’s County the isolation and impact caused by racism is amplified. I know this firsthand.”

In her email to parents, she had stated in part that Queen Anne’s County and Queen Anne’s County Public Schools “should not be exempt from acknowledging injustices toward black people and other people of color and committing to do all that can be done to lessen its impact on students.”

“In the context of the national awakening on racism in America, our educational systems and institutions have an opportunity and obligation to shed light on this issue in a constructive and meaningful way,” said CAIR’s Director of the Maryland office Zainab Chaudry. “CAIR supports Dr. Kane’s efforts to raise awareness about discrimination and inequality. The attacks and criticism she is enduring for speaking out ironically only underscore the need for such discussions.”

“Mrs. Kane should not be attacked, but rather praised for her efforts to bring more meaningful discussions to the classroom”, said Yasmeen Elkoshairi, CAIR’s Media and Public Relations intern in Maryland. “These conversations will bring awareness to social justice issues and

may enlighten many people to facts they had not known before.”