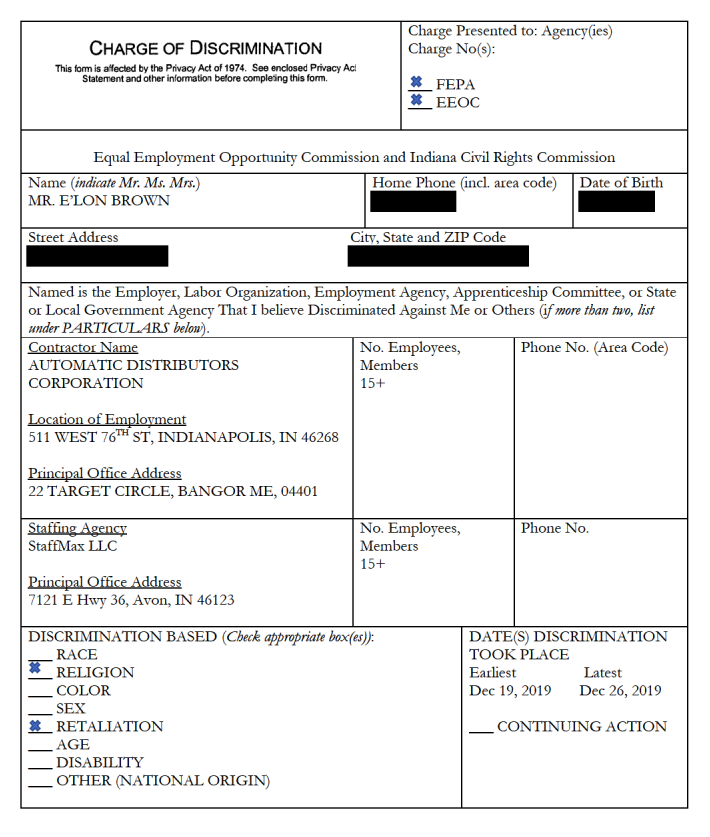 (WASHINGTON, D.C., 6/24/20) – The Council on American-Islamic Relations (CAIR), the nation’s largest Muslim civil rights and advocacy organization, today announced the filing of a U.S. Equal Employment Opportunity Commission (EEOC) discrimination complaint against Staff Max LLC and Automatic Distributors Corporation on behalf of an Indiana Muslim who was fired from his job as a packer after requesting reasonable religious accommodations so that he could perform his daily and jumu’ah (Friday congregational) prayers.

On December 17, 2019, Mr. Brown was hired through staffing agency StaffMax LLC in a packer role for Automatic Distributors Corporation. The day after Mr. Brown was hired, he requested a religious accommodation to take prayer breaks in a clean private room and to attend Friday congregational prayers or jum’uah.

StaffMax asked Mr. Brown to speak with his supervisor but informed him that this request should have been communicated prior to Mr. Brown starting work with Automatic Distributors. When Mr. Brown followed up with Automatic Distributors supervisors about his religious accommodation, they denied his request stating they could not accommodate him because if they did, they would have to accommodate everyone else, which they could not do. He was fired a few days later. StaffMax told him he was terminated because he requested religious accommodations.

CAIR has reported an unprecedented spike in bigotry targeting American Muslims, immigrants, and members of other minority groups since the election of Donald Trump as president.