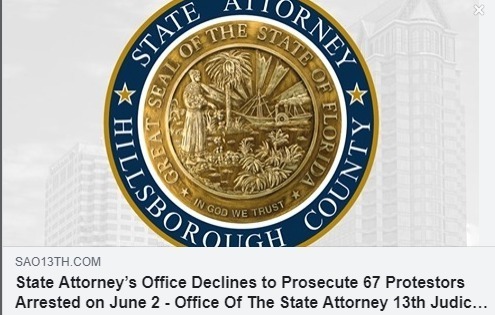 The Office of the State Attorney for the 13th Judicial Circuit issued a press release announcing the State Attorney Andrew Warren’s commendable decision and quoting him stating, “I want to make one thing clear: while we have no intention of prosecuting anyone who is peacefully protesting, we will not tolerate people looking to exploit this moment,” State Attorney Warren said. “There is no place for violence or destruction that puts the safety of our citizens – including our law enforcement officers – at risk.”

“CAIR-Florida commends State Attorney Warren’s decision as it helps to promote an environment that guarantees our citizens’ exercise of their First Amendment rights to address the timely and needed discussions on racism and police brutality. Warren’s decision should be emulated by many other jurisdictions where peaceful protestors have also been arrested.”