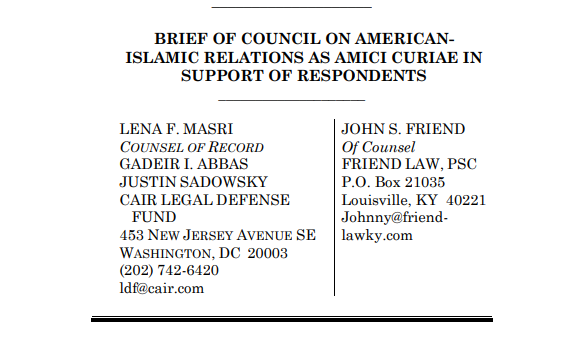 (WASHINGTON, D.C., 8/20/21) — The Council on American-Islamic Relations (CAIR), the nation’s largest Muslim civil rights and advocacy organization, along with John Friend of Friend Law PSC, today announced the filing of an amicus (friend of the court) brief in the U.S. Supreme Court in United States v. Husayn.

The court is determining the extent that the government can shield information from discovery under a doctrine known as the State Secrets Privilege.

CAIR and Friend’s amicus brief illustrates that the State Secrets Privilege has historically been used not to protect legitimate government secrets, but instead to shield the government’s illegal and embarrassing conduct from legal and public scrutiny. This includes the unconstitutional terrorism screening database, or the watchlist, which the Government refuses to provide details about based on the State Secrets Privilege.

“American Muslims are denied their rights and when they seek answers they are met instead with claims of privilege,” said CAIR Civil Rights Director Lena Masri. “Transparency is necessary to protect constitutional rights.”

John Friend added: “The entire theory of the American government relies on the government being accountable to the people. The state secrets privilege is too often being used to prevent accountability and that must stop.”

“From the very beginning, the government has been invoking the State Secrets Privilege in bad faith to avoid judicial review,” said CAIR Trial Attorney Justin Sadowsky. “The Supreme Court should take back its power to decide when the government violates the Constitution.”