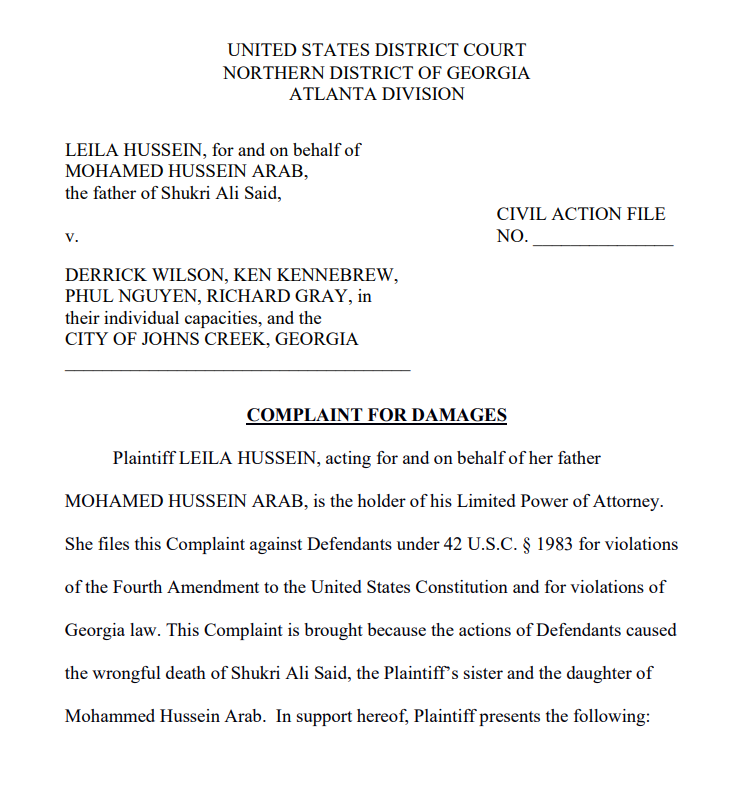 (ATLANTA, GA, 4/23/2020) – The Georgia chapter of the Council on American-Islamic Relations (CAIR-Georgia), The Awad Law Firm, P.C., and Spear & Filipovits LLC today announced the filing of a wrongful death lawsuit against the City of Johns Creek on behalf of the family of Ms. Shukri Ali Said, an American Muslim woman who was shot and killed by police officers while experiencing a mental health crisis in 2018.

The lawsuit accuses four Johns Creek police officers of engaging in excessive force and violating the U.S. Constitution by firing a taser and bean bag at Ms. Said while she was walking by herself on an empty road, and then shooting the 127-pound woman five times in the head, chest, and neck.

Officers Phil Nguyen and Richard Gray, the two officers who shot Ms. Said, have refused to cooperate with the Fulton County District Attorney Office’s ongoing investigation into the shooting.

Despite their refusal to sit down for an interview with the prosecutor’s office, both men remain on active duty with the Johns Creek Police Department.

SEE: Who Was Shukri Ali Said?

“Police brutality, particularly against communities of color, continues to be an ever-growing stain on the fabric of our nation. For too long, far too many black lives and dreams have been shattered by the actions of hyper-militarized police officers who escape justice for excessive force. While nothing can replace the life that was lost, we hope this legal action will help Shukri’s family obtain justice for her death.”

In a statement, attorney Ibrahim Awad of The Awad Law Firm said:

“Shukri Said was a vibrant, intelligent, and caring young woman loved by her family. Her life and dreams were violently cut short by the reckless, unlawful actions of these four police officers, and by extension, the City of Johns Creek. This lawsuit is the first step in our effort to hold those that killed Shukri accountable.”

The Awad Law Firm, P.C. was founded by Ibrahim Awad and specializes in holding wrongdoers accountable for causing serious injury and wrongful death to others. The Awad Law Firm strives to respect, protect, and uphold every person’s humanity and dignity, by either representing them or directing them to legal resources in a trustworthy manner.

CAIR-Georgia is a chapter of America’s largest Muslim civil rights and advocacy organization. Its mission is to enhance the understanding of Islam, encourage dialogue, protect civil liberties, empower American Muslims, and build coalitions that promote justice and mutual understanding.