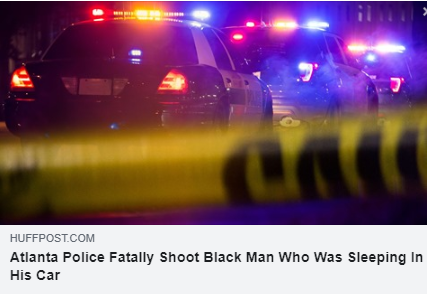 (ATLANTA, GA – 6/14/2020) — The Georgia chapter of the Council on American-Islamic Relations (CAIR-Georgia) today joined the Georgia NAACP and other civil rights organizations in calling on the City of Atlanta to respond to the police shooting of Rayshard Brooks by pursuing major changes in policy, not just changes in personnel.

CAIR-Georgia is also calling for the Fulton County District Attorney’s Office to order the immediate arrest of the officer who shot and killed Brooks.

“A phone call about a man sleeping in a car should never escalate into a police shooting,” said CAIR-Georgia Executive Director Abdullah Jaber. “A taser is not a deadly weapon and shooting a man multiple times in the back while he’s running away is the epitome of police brutality. The videos speak for themselves, and we need immediate accountability.”


“Too many investigations of police shootings, particularly those involving Black men and women, disappear into a black hole for months or years without resolution,” said CAIR-Georgia Legal & Advocacy Director Murtaza Khwaja. “The Fulton County District Attorney’s Office needs to act now by arresting and charging the officer who killed Rayshard Brooks.”

On June 12th, Atlanta Police Department officers attempted to arrest local resident Rayshard Brooks on suspicion of driving under the influence after he was found asleep in his car in the drive-through lane at Wendy’s. An ensuing struggle ended when one of the officers shot Mr. Brooks after he pointed a taser behind him while attempting to run away.

In response to the shooting, Mayor Bottoms has called for the termination of the officer, and Atlanta Police Department Chief Erika Shields has resigned.

CAIR-Georgia is calling on the City of Atlanta to:

The Washington-based civil rights organization and the American Muslim community are standing in solidarity with all those challenging anti-black racism and police brutality.