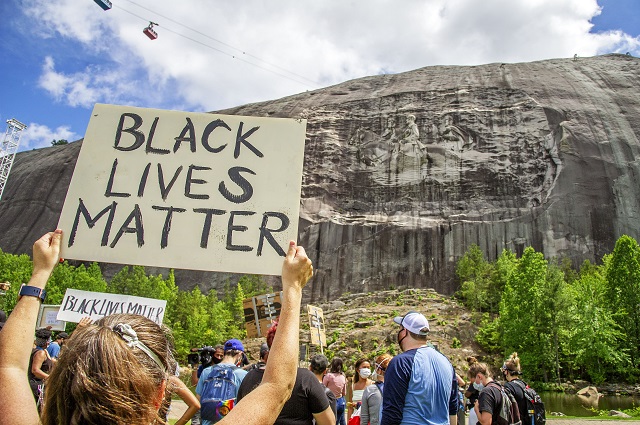 (ATLANTA, GA – 7/1/2020) — The Georgia chapter of the Council on American-Islamic Relations (CAIR-Georgia) today joined the multitude of Georgian voices calling on state and local officials to transform the Confederate Memorial Carving at Stone Mountain Park.

This comes in the midst of a nationwide movement to remove other such memorials and monuments glorifying slavery and white supremacy.

The Confederate Memorial Carving depicts the President of the Confederate States of America, Jefferson Davis, along with Confederate Generals Robert E. Lee and Stonewall Jackson. It was funded in part by the Ku Klux Klan (KKK) and served as the venue for their meetings beginning with the second coming of the KKK in 1915.

“A symbol is not empty of meaning. And the acceptance of a symbol depicts an accepted mindset. We need to understand that there is a difference between remembering history and revering history—a history rooted in white supremacy, systemic oppression, murder, and slavery.

“Historically, the Confederate sculpture was a response to the 1954 Brown vs. Board of Education Supreme Court decision, which held that segregating schools by race was unconstitutional. We don’t know of any nation that celebrates or honors treason or its traitors and yet the sculpture does exactly that—celebrates hate and violence, and honors American traitors.

“Our state officials must uphold principles of justice and liberty for all Americans. It’s time for us to be truthful and honest about what these memorials and monuments symbolize.”