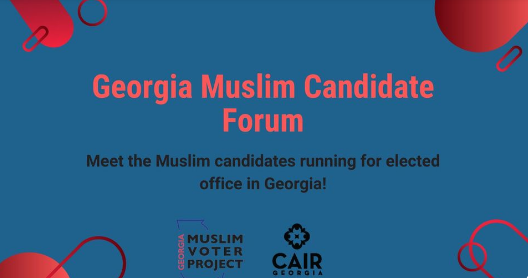 (ATLANTA, GA, 5/19/2022) – On Wednesday, May 18, 2022, the Georgia chapter of the Council on American-Islamic Relations (CAIR-Georgia) and the Georgia Muslim Voter Project (GAMVP) hosted a Georgia Muslim Candidate Forum live on Facebook.

The non-partisan Facebook live event aimed to enable Muslim voters to learn more about the candidates and their policy stances.Tanjina Islam, a prominent community member, moderated the conversation between the 6 candidates present at the forum. In total, 8 Muslim candidates are running for various offices in Georgia this year.

“In a state where the Muslim population is only approximately 0.7 percent of the total population – much of it centered in the Atlanta metropolitan area – one might expect Muslim candidates to experience challenges. However, according to the candidates, their religion is not an obstacle to their candidacy; rather, it is one of the factors compelling them to run.”

“At CAIR-Georgia, one of our goals is to empower Muslims in Georgia by increasing civic engagement and to ensure our laws and elected officials reflect the diversity of our state,” Hosseiny added.

Georgians go to the polls for primary elections on Tuesday, May 24, 2022.

The Georgia Muslim Voter Project was founded in late 2015, in response to the growing anti-Muslim rhetoric that was prevalent in mainstream politics and the low rates of civic engagement in the Muslim community.