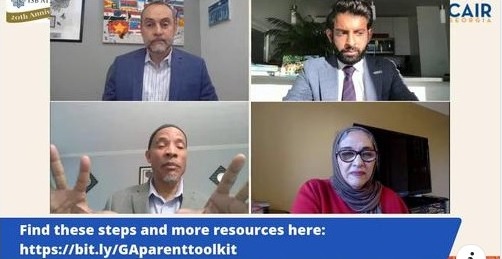 (ATLANTA, GA – October 19, 2021) – The Georgia chapter of the Council of American-Islamic Relations (CAIR-Georgia) and the Islamic Speakers Bureau of Atlanta (ISB Atlanta) recently hosted an online educational event, “Islamophobia at Schools: A Webinar for Parents in Georgia,” designed to empower parents in the Georgia Muslim community to counter Islamophobia in their children’s schools.

VIDEO – Islamophobia at Schools: A Webinar for Parents in Georgia

The webinar was held in response to a number of calls received by CAIR-Georgia and ISB Atlanta around the 20th anniversary of 9/11. Concerned parents shared the use of anti-Muslim terminology in 9/11 remembrance videos shown to students by schools and Islamophobic comments and lessons in classrooms while being taught about 9/11.

In light of the distress caused to Muslim students and parents and the lack of understanding about avenues and resources available to American Muslims, CAIR-Georgia and ISB Atlanta collaborated to host this online event.

Panelists discussed the prevalence of Islamophobia in schools in Georgia and parents’ role and responsibility towards Muslim students. The experts suggested ways for parents to be proactively engaged in the school system to prevent Islamophobia and offered a step-by-step guide on how to advocate for children in case of Islamophobic incidents. They further shed light on ways to hold administrators and school systems accountable to diversity and inclusion standards with a view to offer restorative justice and inclusive school environments for students of all faiths. ISB Atlanta and CAIR-Georgia also developed a toolkit with the resources discussed during the webinar. The webinar ended with an informative question and answer session.

“The wellbeing and mental health of all children and providing them with schools where they feel they belong were the focus of our webinar. We also shared with Georgia Muslim parents the resources available to them to proactively interact with their schools.”

“We encourage Muslim parents to be active and engaged members of the education system just as they should in other spheres of society. Parents should know that they have the power to not only confront Islamophobia if and when it occurs, but also to create an environment that prevents xenophobia and bigotry from taking root.”

In August, CAIR’s national office released a school resource document with tips and educational resources that teachers can use to teach about the 20th anniversary of the September 11, 2001, attacks.

ISB Atlanta is an organization that provides an opportunity for people to learn about Islam and Muslims in an objective and educational manner through dialogue, outreach programs, presentations, and panels. ISB acts as a catalyst in bringing the American Muslim communities to the forefront as active partners alongside other communities in Georgia through relationship building, education, leadership development, and community involvement.

CAIR-Georgia is the Georgia chapter of the Council on American-Islamic Relations, which is the nation’s largest Muslim civil rights and advocacy organization.