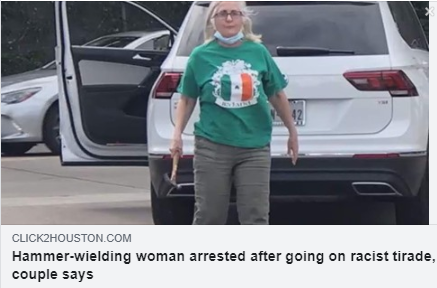 (HOUSTON, TX, 5/27/2020) – The Houston chapter of the Council on American-Islamic Relations (CAIR-Houston), the nation’s largest Muslim civil rights and advocacy organization, today welcomed the arrest of a woman targeting a Latino couple in Houston.

Arturo Cordovez and his wife, Dr. Lia Franco, who are natives of Ecuador, were visiting Houston from New Orleans were reportedly confronted by a woman walking toward them with a hammer. The couple asked the woman what she wanted, and the alleged perpetrator began yelling “You Mexicans, get out of my F**ing country. Go back to your F**ing country.’”

In a statement, CAIR-Houston President and Chairman of Board of Directors John Floyd, Esq., said:

“Being Latino or a person of color in the Trump era has become discomforting and dangerous. As we see in this case and around the nation, racism and hate is a sickness. It is inflamed by the pandemic and the administration’s and its supporters’ divisive comments. This is the second case in less than three months in Houston that has surfaced in the media thanks to video documentation. CAIR-Houston welcomes the immediate actions and arrest in this case. We will continue to monitor this case and other hate crimes as they develop.”

He encouraged anyone who is a witness or victim of hate and discrimination to report it immediately to the authorities and to contact CAIR-Houston for support at 713-838-2247 or at our website: https://cairhouston.com/get-help-now/

In past weeks, CAIR has condemned several hate incidents.