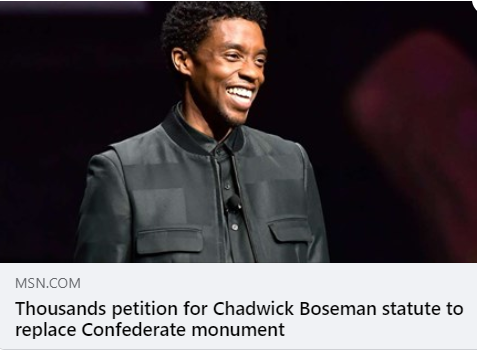 (WASHINGTON, D.C., 9/4/2020) – The Council on American-Islamic Relations (CAIR), the nation’s largest Muslim civil rights and advocacy organization, today joined the nationwide call to remove a Confederate statue from the South Carolina hometown of “Black Panther” actor Chadwick Boseman, who died recently after a battle with cancer.

CAIR said thousands of people have signed petitions asking officials in Anderson, S.C., to relocate the Confederate statue and to put up a public memorial honoring the actor.

“Honoring Confederate soldiers and other white supremacists on government property is unacceptable anywhere and everywhere, including the hometown of Chadwick Boseman,” said CAIR National Deputy Director Edward Ahmed Mitchell. “We support local calls for officials to remove the Confederate statue and replace it with a memorial highlighting the names of Chadwick Boseman and other Americans who have positively contributed to the struggle for racial equality in society.”

He noted that yesterday, CAIR condemned the hanging of a Confederate flag near a Black-owned business in Tennessee and racist graffiti targeting an Iowa family’s home.