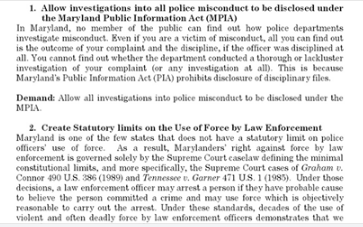 (BALTIMORE, MD, 6/22/20) – The Maryland office of the Council on American-Islamic Relations (CAIR) has joined the ACLU Of Maryland and a diverse coalition of more than 60 organizations in the state calling on state lawmakers to commit to supporting meaningful police reform, accountability and policy changes as a critical solution to racial injustices disproportionately impacting communities of color.

“Moving beyond protests, substantial policy reform and structural change is the most effective way to guarantee justice and accountability in policing,” said CAIR’s Maryland Legislative Intern Eimaan Imran. “We call on our lawmakers to support these measures.”

LEBOR grants special protections even for those officers with a proven record of unauthorized use of deadly force. Since its enactment, it has hindered accountability and allowed police abuse to go unpunished.

Baltimore City, a majority Black jurisdiction, is the only locality in the state that is not allowed to govern its own police department. Because the city’s law enforcement agency is controlled by the state, residents must rely on lawmakers in Annapolis – who, in many cases, reside elsewhere and aren’t familiar with the local culture, challenges or concerns of local communities – to amend policies and practices.

The Maryland Public Information Act (MPIA) currently blocks access to information about how police misconduct investigations are handled, currently categorizing this information as confidential. Without exception, constituents should have the right to know if their cases are investigated properly or even at all.

4. Restricting use of force by law enforcement

Maryland is one of a handful of states that do not have a statutory limit on police officers’ use of force. Our lawmakers need to pass a law that addresses this issue in our state.

Overwhelming evidence has proven that when there are police officers at schools, arrests of children substantially increase, even though disruptive behavior is often better addressed through non-punitive supports and interventions. Instead of depending on School Resource Officers, we should shift our focus to hiring more trained counselors, social workers, psychologists, and behavioral specialists in schools.

Organizations Calling for Police Reform in Maryland include:

Advocates for Children and Youth

Coalition for Justice for Anton Black

Do the Most Good

Leaders of a Beautiful Struggle

March for Our Lives Maryland

Mothers on the Move

Office of the Public Defender

Out For Justice, Inc.

Showing Up for Racial Justice, Baltimore