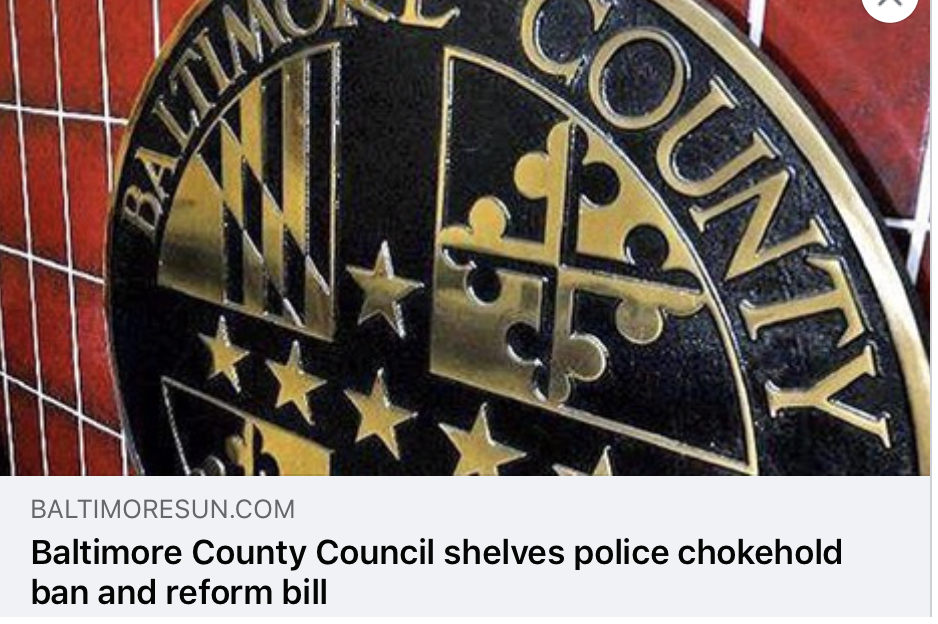 (BALTIMORE, MD., 8/5/20) – The Maryland office of the Council on American-Islamic Relations (CAIR) and the Baltimore office of Jews United for Justice (JUFJ) today joined together to denounce the Baltimore County Council’s failure to pass Bill 73-20 at Monday evening’s Council meeting.

Introduced in the wake of George Floyd’s murder, the measure introduced by Councilman Julian Jones would have banned police chokeholds, established a duty of another officer to intervene and report in cases of excessive use of force, whistle-blower protections, added two civilians to police disciplinary hearing boards, and expanded de-escalation training for officers, among other measures.

The council voted 4-3 to table the bill, with only Councilmembers Izzy Patoka, Julian Jones, and Wade Kach opposing the motion to postpone the vote. Bills that are tabled rarely pass.

“We are extremely disappointed and saddened by Baltimore County Council’s failure to pass the police reform bill, which would have greatly reduced unnecessary force use by police officers,” said CAIR Government Affairs Intern Huzzaifa Muhammad. “However, the pursuit of justice and equality will continue to be a top priority for us. At a time in which police reform is a key focus for cities across America, we will continue to hold County Executive Johnny Olszewski and the council accountable to higher standards.”

“At Monday’s meeting, Chairperson Bevans indicated that we didn’t need reform because George Floyd wasn’t killed by Baltimore County police. We must not forget those who were: Korryn Gaines, Christopher Brown, Eric Sopp, Jamal Taylor, Gamel Brown, Robert Johnson, Jr, and so many others,” said Claire Landers, Pikesville resident and Board member of Jews United for Justice. “No amount of additional training or data collection will change outcomes for officers’ interactions with Black and vulnerable members of our County’s community until they are held accountable for maintaining BCPD’s existing standards.”

Jews United for Justice advances economic, racial, and social justice in the Baltimore-Washington region by educating and mobilizing local Jewish communities to action.