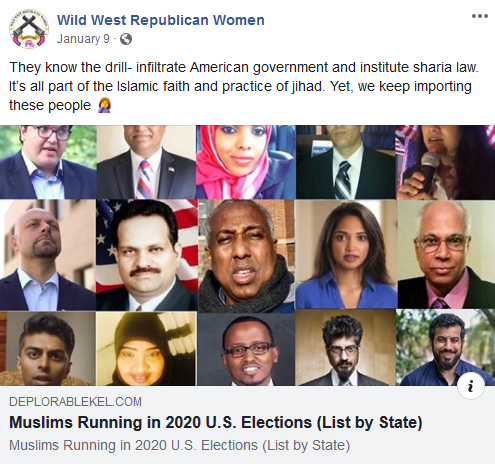 [Note: John Bennett, who has called for the removal of American mosques and calls Islam a “cancer,” is the Vice President of Understanding the Threat (UTT) whose founder and President John Guandolo on Sunday called for the “execution” of anti-racist protest leaders. Guandolo said: “[W]e should round up the leaders and execute them for trying to revolt and overthrow the government.”]

On January 9, the Wild West Republican Women’s Club posted on Facebook an Isamophobic message attacking American Muslim candidates running for office because of their Islamic faith and promoting an anti-Muslim conspiracy theories alleging that these Muslim candidates “know the drill- infiltrate American government and institute sharia law” adding “It’s all part of the Islamic faith and practice of jihad. Yet, we keep importing these people 🤦‍♀️”

The post links to a “Deplorable Kel” article that tracks and disparages Muslim candidates running in 2020 U.S. elections.

This week Tawater dismissed concerns about Bennett’s record and said she looks forward to hearing Bennet discuss the “current riots and its connection to the communist and Islamic movement and their strategic plan to subvert America.”

On Facebook, the Wild West Republican Women’s Club defended their choice to host Bennett, with a seperate post stating “you all will be blessed to listen to his message and the TRUTH he will share about the… Islamic threat in America…”

“It is shameful that the organizers of the Dodge City Republican Expo have chosen to blatantly disregard Bennett’s long-standing record of anti-Muslim bigotry by retaining him as keynote speaker.

“Not only is the Wild West Republican Women’s club amplifying Bennett’s hateful anti-Muslim views and spreading Islamophobic conspiracy theories online – they are damaging the Kansas Republican Party’s ability to claim it is a big tent party open to all regardless of faith.”

On Monday, the national office of CAIR and CAIR Kansas called on the Kansas Republican Party and the United Wireless Arena in Dodge City, Kan., to drop anti-Muslim hate group leader John Bennett as a keynote speaker at the Dodge City Republican Expo.